We also have a solution to our last Apple interview question and a new question from Bloomberg.

Tinder is one of the largest dating apps in the world with more than 75 million monthly active users.

One of their product features is Swipe Night, which is a choose-your-own-adventure game built in the app. You watch short video clips (themed around an solve-the-mystery game) and you make choices on what the main character should do. Tinder will match you with possible dates based on your choices.

Everyone on the app is watching the same video clips and it’s done live - at 6 p.m. local time.

Shreyas Hirday is a senior software engineer at Tinder and he wrote a great blog post on the technology Tinder used to stream the video clips to millions of users simultaneously.

There are many ways to deliver video content. The best approach depends on the tradeoffs you’re making.

In Tinder’s case, they cared about

Based on these goals, Tinder decided to use HTTP Live Streaming (HLS), an adaptive bitrate protocol developed by Apple.

Adaptive bitrate streaming just means that the server will have different versions of the video and each version differs in display size (resolution) and file size (bitrate).

The video player will dynamically choose the best video version based on the user’s screen size and bandwidth. It will choose the version that minimizes buffering and gives the best user experience.

An HLS stream will provide a manifest file to the video player, which includes the URL to each copy of the video as well as the level of bandwidth the user should have in order to view that level of quality without issue.

Tinder engineers used FFMPEG to transcode MP4 files to HLS streams. They developed a workflow that had the MP4 file and configurations (resolution, bitrate, frame rate, etc.) as input and a directory containing the HLS stream as output. 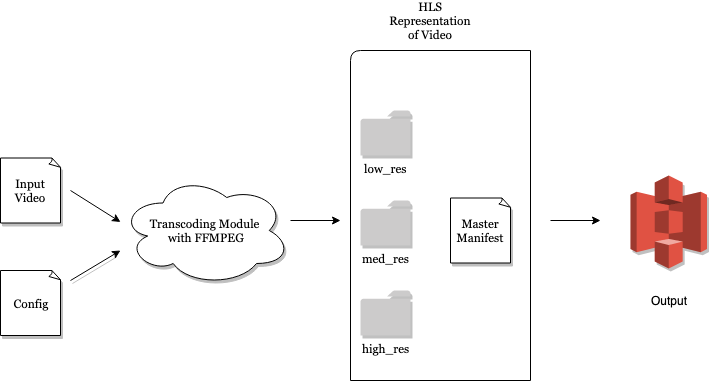 You can read the article for a discussion on how they configured each of these parameters.

The output directory will have a Master Manifest file with information about all the different video versions in the HLS stream.

The video player will then decide which version to play and whether it should switch to a lower file-size version based on the information in the manifest file.

Therefore, having an accurate manifest file is very important for the user experience.

Apple provides a Media Stream Validator tool that tests the manifest by simulating a streaming experience. Tinder uses the results from that test to update the manifest and ensure accuracy.

Tinder then places the finalized manifest and videos in their production AWS S3 bucket.

As users from different areas of the US start playing SwipeNight, the CDN will copy the HLS stream directory from AWS S3 into regional caches so users from that region can get low latency access.

The Tinder app measures these KPIs along with metadata about the device and its network connection.

Tinder then works to find the right balance between these 5 KPIs for their use case. For a traditional streaming app like Netflix, spending 5 seconds in a buffering state might not be that bad. But a 5 second buffer on a mobile-centric app like Tinder can feel like an eternity.

For more details, you can read the full blog post here.

Designing Data Intensive Applications (DDIA) is a must-read if you’re interested in backend engineering. The data engineering world is full of buzzwords and hype, but Martin Kleppman does an amazing job of breaking down all the core technologies.

Here’s a summary of Chapter 5 from DDIA on Replication

Replication is where you keep a copy of your data on multiple different machines. These machines are connected via a network, so they’re all accessible to your backend server(s).

Instead of having a single machine serve as your database, you are now using a distributed database consisting of multiple machines.

The difficult part about replication lies in handling changes to replicated data.

When you get a write request that modifies your database, how do you make sure that all the replicas reflect this write request?

How do you stop replicas that haven’t updated from responding with stale data to read requests?

Almost all distributed databases use one of these three approaches and they all have their pros and cons.

However, Single Leader Replication is the most popular replication strategy for distributed databases. Therefore, we’ll dive further into single leader. If you’re interested in learning more about multi-leader and leaderless strategies, check out the book.

With a synchronous write, the leader will first make sure every follower node has written the data change to their local database. Once the leader node has received confirmation from all the followers, it will respond with a message that the write was successful.

For a semi-synchronous write, the leader will wait for write confirmation from a specific number of follower nodes (this parameter can be configured) until it responds with a message that the write was successful.

In practice, synchronous writes are rarely used. With a synchronous write strategy, write requests will take an extremely long time (since you have to wait for every follower to respond) and will frequently fail (any time one or more follower nodes are not responsive).

Two issues that come up frequently with Single Leader replication are

Node outages are inevitable, especially if you’re using a large distributed database with many follower nodes.

There are two types of node outages: follower outages and leader outages.

If a follower node fails, then it can recover quite easily. Followers keep a log of all the data changes received from the leader in local, nonvolatile storage. Therefore, the follower knows the last transaction it processed.

The follower will query the leader for all the changes that have happened since that last transaction, and then update its local state to match the present.

Handling a failure of the leader is trickier. One of the follower nodes needs to be promoted to the new leader and clients have to be reconfigured to send their writes to the new leader. The other followers also have to start consuming data changes from the new leader.

This process is called failover.

Failover processes have tons of things that can go wrong

When you’re using a single-leader replication strategy with semi-synchronous or asynchronous writes, you’ll frequently run into consistency issues where a client will read stale data from a follower node that hasn’t been fully updated.

This inconsistency is a temporary state, and if you wait for a bit then all the followers will eventually catch up. Therefore, this effect is known as eventual consistency.

However, eventual consistency is a vague term, and doesn’t specify how long the replication lag is. It could be a few seconds or even a few minutes.

Therefore, even with “eventual consistency”, the replication lag can be a big problem for your users.

In order to ease these issues, there are several approaches that you can use to reduce some of the common issues that users face.

We’ll go through some of these approaches and the issues that they solve.

Read Your Own Writes

Let’s say you’re building a twitter clone. The user can post a tweet from their computer, which will send a write request to your distributed database.

This write request is asynchronously replicated, so the leader will respond that the write was successful after changing it’s local state. Then, it will send the change to all the follower nodes.

If the user refreshes their page right after tweeting and tries to reload, the new read request for the user’s previous tweets might go to a follower node that hasn’t been informed of the new tweet.

Obviously, this can be super frustrating to users.

Read Your Own Writes consistency is a solution that guarantees that if the user reloads the page, they will always see any updates they submitted themselves. It makes no promises about other users.

Read Your Own Writes consistency can be implemented in many ways. One possible way is to track the last time a user submitted an update. If they submitted an update within the past minute, then their read requests should be handled by the leader node.

Going back to the twitter clone example, asynchronous replication will result in some follower nodes lagging other follower nodes in terms of updates.

This will result in his twitter feed “moving back in time” as the data he’s getting is stale. This obviously means a bad user experience.

Monotonic reads is a guarantee that this kind of anomaly does not happen.

One way of achieving this guarantee is by making sure that each user always reads from the same follower node  (different users can read from different replicas).

The replica can be chosen based on a hash of the user ID, rather than randomly.

Let’s say you have user A and user B on your twitter clone app. User A tweets out a picture of his dog. User B reply tweets to that picture with a compliment for the dog.

There is a causal dependency between the two tweets where user B’s reply tweet doesn’t make any sense if you can’t see user A’s tweet.

Constant Prefix Reads is a guarantee that solves this anomaly. This guarantee says that if a sequence of writes happens in a certain order, then anyone reading those writes will see them appear in the same order.

This can be solved if the database always applies the writes in the same order, but there are complications that arise when your database is sharded.

Check out DDIA for more details on this.

How would you build a spelling correction system?

Implement a BSTIterator class that represents an iterator over the in-order traversal of a Binary Search Tree.

You should implement three functions

Since we’re building an iterator that does this, we can’t use recursion (and can’t take advantage of the call stack).

Instead, we have to simulate an interative inorder traversal. 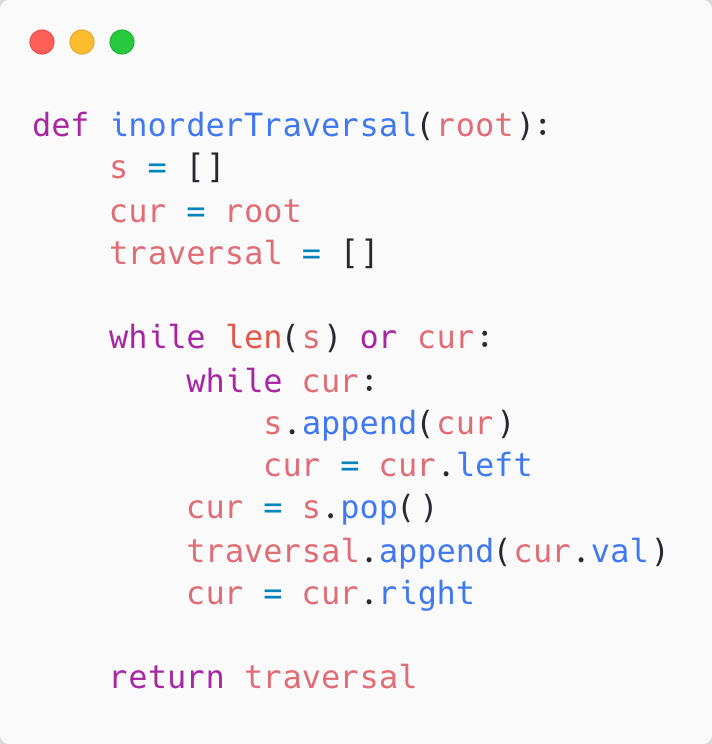 Once you understand how to write an iterative inorder traversal, creating the inorder iterator is simple. 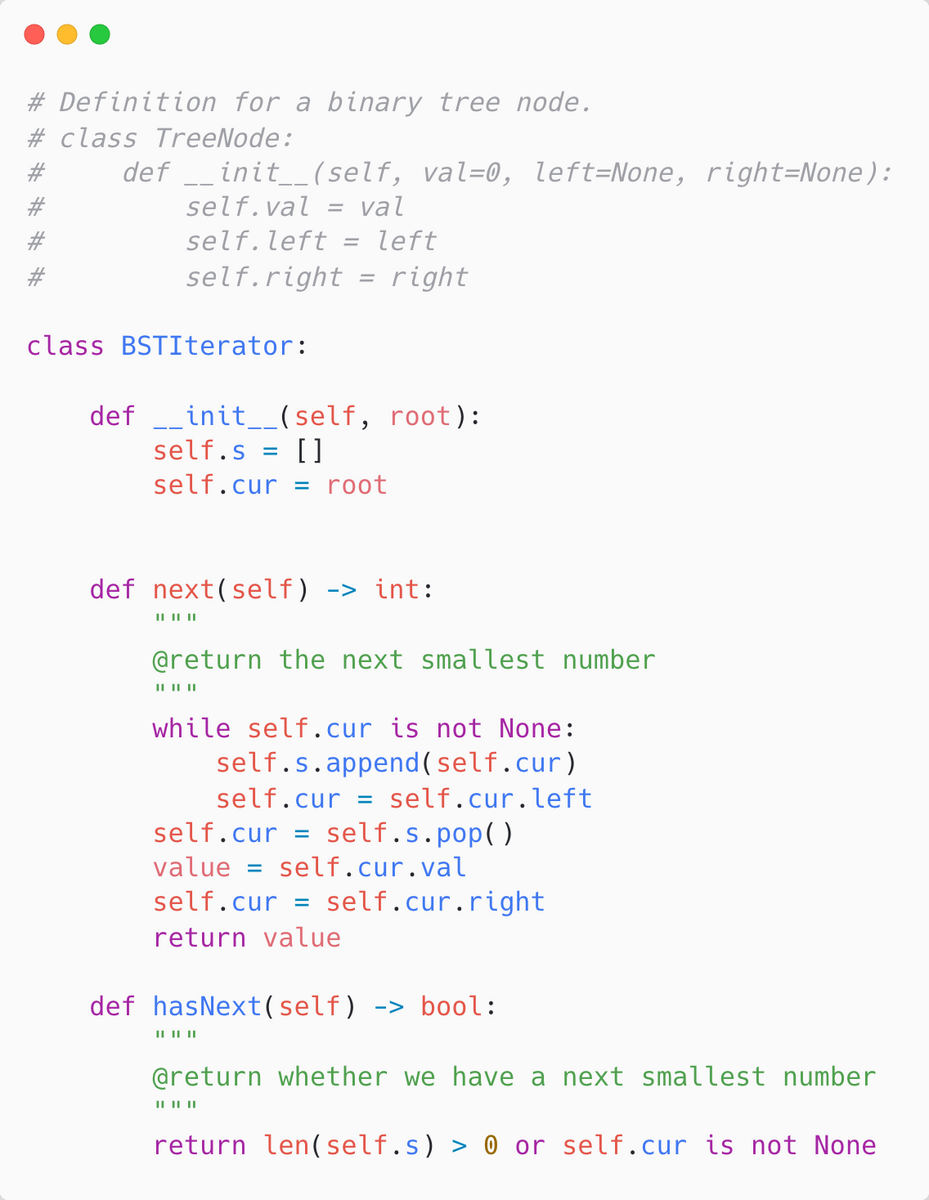