Clubhouse is a startup started less than a year ago that is now worth 4 billion dollars. But, they're facing a massive decline in growth and tons of new competition. Plus, the Stripe of India expands.

Razorpay is a Bangalore-based fintech startup that was started in 2015 (part of the Y-Combinator Winter 2015 class).

The company started as a B2B payments company (similar to a Stripe for the Indian market) but has since expanded to a full-service digital banking platform (neobank) for businesses in India.

They are the leading payments provider in India and are working on becoming the leading provider of banking and payout products to businesses for things like payroll and vendor payouts. They’ve also launched a platform for corporate credit cards and other financial products that businesses need on a day to day basis.

Razorpay is the first Indian Y-Combinator company to reach unicorn status (a valuation of $1 billion dollars or more).

The company now serves ~15,000 businesses and annually lends out $80 million dollars to customers with Razorpay Capital. They plan to process over $50 billion dollars in transactions by the end of 2021.

The fundraising round was co-led by Sequoia Capital India and Singapore’s Sovereign Wealth Fund (GIC). Other existing investors include Tiger Global and Ribbit Capital.

The founders of Razorpay are Mathur and Shashank Kumar, who met at the Indian Institute of Technology Roorkee college.

Frontend Engineers are working with the ReactJS stack although they’re mostly looking for strong JavaScript fundamentals (knowing ReactJS is a plus).

Backend Engineers are expected to have knowledge of Relational Databases (MySQL) and databases like Redis. Plus, Unix/Linux based systems and Java, Go or PHP.

You can view jobs at Razorpay here.

Clubhouse is the buzzy new social network that offers live audio rooms. The app allows you to create rooms where you can host a voice call with your friends or any strangers who join your room. You can also join other people’s rooms where the speakers might include celebrities like Elon Musk, Sonam Kapoor or Mark Zuckerberg.

The company was started a year ago and is now worth $4 billion dollars in their Series C fundraising round. The VC firm Andreessen Horowitz has been the lead investor in Clubhouse’s Series A, B and now C fundraising rounds. Other investors in this round include Tiger Global and venture capitalist Elad Gil.

This Series C round represents a 4x jump from Clubhouse’s Series B round, which valued the company at $1 billion dollars.

Clubhouse has been facing some headwinds though with their growth slowing significantly. Their downloads have been slowing for the past few months and they’ve only onboarded 643,000 users so far in April. 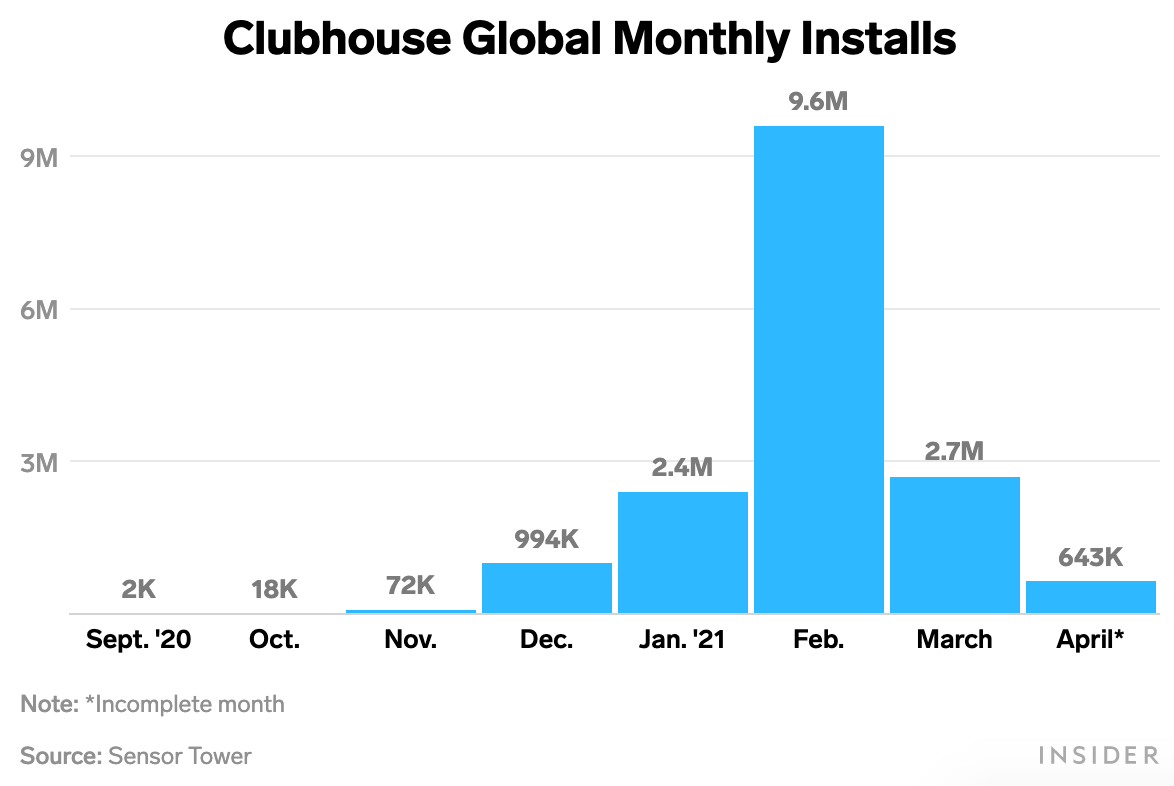 In terms of their tech stack, Clubhouse uses the Agora’s API to run their audio chat.

The story behind Agora is quite fascinating. In 1997, two Chinese engineers joined the founding team at a video conferencing startup called WebEx.

Both of these engineers later started their own tech companies. One of the engineers, Bin “Tony” Zhao started Agora.

The other engineer, Eric Yuan, started Zoom (the video conferencing company that is now worth $100 billion dollars).

Not Boring wrote a fascinating case study on Agora’s history and SDK.

You are given a binary tree in which each node contains an integer value. The integer value can be positive or negative.

Write a function that counts the number of paths in the binary tree that sum to a given value (the value will be provided as a function parameter).

The path does not need to start or end at the root or a leaf, but it must only go downwards.

You cannot use + or any arithmetic operators!

As you might’ve guessed, we can solve this question with Bit Manipulation.

First, let’s walk through addition in Base 10.

Now, we’ll do the carry overs.

Now, we can add the addition part and the carry over part to get the final sum.

So, for doing this operation with bit manipulation, we can just repeat the same steps!

We can simulate the addition part with the XOR operator. That’s because if we add the two binary numbers together without carrying over, the ith bit in the sum will be 0 only if a and b have the same ith bit (both 0 or both 1).

For the carry over, the ith bit in the sum will be 1 only if a and b have (i - 1) bits that are both 1. This can be simulated with an AND operation and then left shifting by 1.

Then, we have to add the addition part and the carry over part. We can do this by recursively calling our add function!

The base case will be when one of the numbers is 0, then we can just return the other number.

Reply back with the time complexity of our solution!

We’ll tell you if you’re right or wrong!