Nuro partners with Dominos to deliver pizza with their self-driving robot. Tiger Global is investing heavily in the Indian startup ecosystem. Plus, a great website on Design Patterns in Python!

Nuro partners with Dominos for Pizza delivery in the Houston Area

Dominos will start delivering pizzas using Nuro’s driverless cars in Houston this week as part of a pilot program. Customers can place orders online and their pizza will be delivered with Nuro’s R2 robot car.

So, if you’re in the Houston area, be sure to carry around a crowbar. If you’re lucky, you might spot one of Nuro’s cars and be able to snag yourself a free pizza! Just kidding. 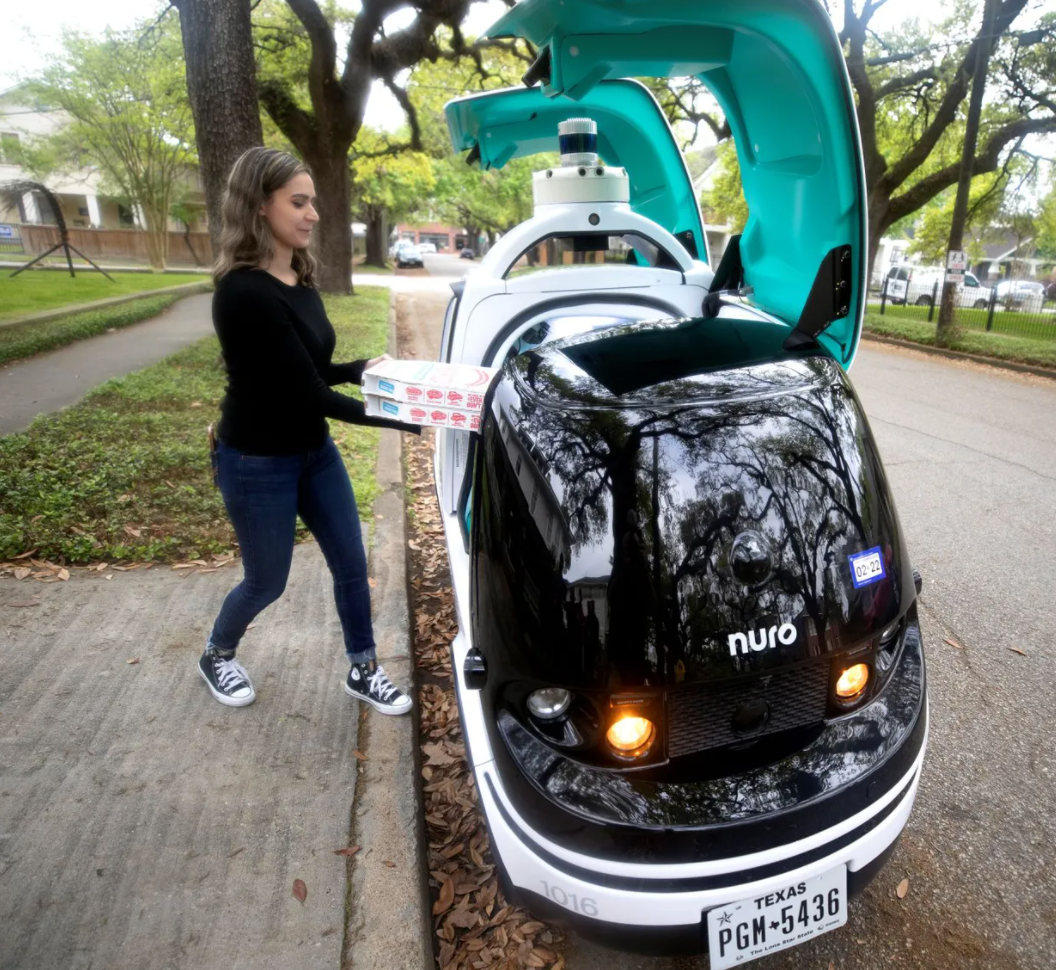 Nuro was founded in 2016 by Jiajun Zhu and Dave Ferguson. Zhu was a principle software engineering at Waymo (Google’s Self Driving car project) and Ferguson was a principle machine learning engineer.

Both Zhu and Ferguson left Waymo in 2016 and founded Nuro that September. By January 2018, Nuro had brought their robotic delivery vehicles to market with $92 million dollars in funding from Greylock Partners.

Nuro is quite unique in that they’re also building their own vehicle (not just a self-driving system like Waymo or Cruise). Their vehicle is specially built for deliveries with space for ~12 grocery bags.

The company’s R2 car is also being used in other places. Some medical facilities in California use Nuro to transfer medical supplies and their R1 car (previous version) was used in a pilot program in Scottsdale, Arizona.

If you follow the Venture Capital game, you’ve probably heard of Tiger Global. They’re a NYC-based hedge fund started by Chase Coleman, a protege of Julian Robertson ( founder of the famous Tiger Management hedge fund). They have around $50 billion dollars in assets under management.

The hedge fund has been taking Silicon Valley by storm with an incredibly aggressive approach to investing in technology companies. They’re known for moving extremely quickly in terms of due diligence (sometimes it’s just a day) and offering companies very attractive fundraising terms.

If you’d like to read more about Tiger’s approach in general, Everett Randall (a venture capitalist at Founders Fund) wrote an awesome piece on their strategy and why they’re pissing off a bunch of VCs.

Now, Tiger Global has the Indian startup ecosystem in their sights. They’ve finalized more than 25 deals with Indian startups this year.

Last week, they led investments in social network ShareChat, business messaging platform Gupshup and investment app Groww. All of these investments were at valuations more than $1 billion dollars.

"Whatever I need to get funded by Tiger"

However, Tiger Global isn’t new to the Indian startup ecosystem. In 2009 they were big investors in Flipkart and they invested in Ola in 2012.

India is currently the world’s third largest startup hub and is rapidly growing (poised to produce more than 100 unicorns in the coming years according to Credit Suisse),

You are given an array and an integer K where K is less than size of the array.

Return the smallest K numbers in the array.

The brute force solution is to just sort the array and then return the first K elements.

Using an algorithm like quicksort, this would take N log N where N is the number of items in the array.

Therefore, we can use a max heap to keep track of the K smallest numbers.

We’ll start by adding the first K elements in our array to our max heap. Then, we’ll iterate through the rest of the array.

For each element in our array, we’ll first check if it is smaller than the largest element in our max heap. If it is, then that means our element is one of the smallest K integers (that we’ve seen so far).

After we iterate through the entire array, then we can just return the elements in our heap.

The time complexity of our solution is N log K where K will always be less than or equal to N. This means it’s an improvement over N log N.

Note: for our Python 3 code, we make use of the heapq library. Unfortunately, heapq’s implementation is a min heap (we need a max heap). Therefore, we use a little “hack” where we multiply each number we insert by -1 (thereby reversing the order).

There’s also an even faster solution using the Quickselect algorithm!

Quickselect is a variant of Quicksort, specifically meant to find the Kth smallest item.

Then, we recurse on both sides.

In Quickselect, we only recurse on one side (the side that contains the Kth smallest element).

Once we find a pivot that divides the list into K elements on one side, then we’ve found the K smallest elements!

Quickselect runs in an average of O(n) time complexity, but it is O(n^2) in the worst case.