How Quora shards their MySQL database

We also have a solution to our last Facebook interview question and a new question from Apple.

Quora is a social platform where users can post and answer questions on anything. The website receives more than 600 million visits per month.

Quora relies on MySQL to store critical data like questions, answers, upvotes, comments, etc. The size of the data is on the order of tens of terabytes (without counting replicas) and the database gets hundreds of thousands of queries per second.

Vamsi Ponnekanti is a software engineer at Quora, and he wrote a great blog post about why Quora decided to shard their MySQL database.

In order to handle the increase in read QPS (queries per second), Quora implemented caching using Memcache and Redis.

However, the growth of write QPS and growth of the size of the data made it necessary to shard their MySQL database.

At first, Quora engineers split the database up by tables and moved tables to different machines in their database cluster.

We’ll talk about how they implemented both strategies.

As the read/write query load grew, engineers had to scale the database horizontally (add more machines).

They did this by splitting up the database tables into different partitions. If a certain table was getting very large or had lots of traffic, they create a new partition for that table. Each partition consists of a master node and replica nodes.

The mapping from a partition to the list of tables in that partition is stored in ZooKeeper.

The process for creating a new partition is

A pro of this approach is that it’s very easy to undo if anything goes wrong. Engineers can just switch the table location in ZooKeeper back to the original partition.

Some shortcomings of this approach are

Splitting large/high-traffic tables onto new partitions worked well, but there were still issues around tables that became very large (even if they were on their own partition).

Schema changes became very difficult with large tables as they needed a huge amount of space and took several hours (they would also have to frequently be aborted due to load spikes).

There were unknown risks involved as few companies have individual tables as large as what Quora was operating with.

Therefore, engineers at Quora looked into sharding strategies, where large tables could be split up into smaller tables and then put on new partitions.

When implementing sharding, engineers at Quora had to make quite a few decisions. We’ll go through a couple of the interesting ones here. Read the full article for more.

Quora decided to build an in-house solution rather than use a third-party MySQL sharding solution (Vitess for example).

They only had to shard 10 tables, so they felt implementing their own solution would be faster than having to develop expertise in the third party solution.

Also, they could reuse a lot of their infrastructure from splitting by table.

There are different partitioning criteria you can use for splitting up the rows in your database table.

You can do range-based sharding, where you split up the table rows based on whether the partition key is in a certain range. For example, if your partition key is a 5 digit zip code, then all the rows with a partition key between 7000 and 79999 can go into one shard and so on.

You can also do hash-based sharding, where you apply a hash function to an attribute of the row. Then, you use the hash function’s output to determine which shard the row goes to.

So, when Quora has a table that is extremely large, they’ll split it up into smaller tables and create new partitions that hold each of the smaller tables.

Here are the steps they follow for doing this

If Quora engineers are satisfied with the results from the dark traffic testing, they’ll restart the process from step 1 with a fresh copy of the data. They do this because the data may have diverged between the sharded and unsharded tables during the dark write testing.

Then, they’ll proceed to the cutover phase where they update ZooKeeper to indicate that the sharded table is the source of truth. The sharded table will now serve read/write traffic.

However, Quora engineers will still propagate all changes back to the original, unsharded table. This is done just in case they need to switch back to the old table.

This article was published in 2020 and Quora had successfully sharded 3 large production tables before the article was written.

For more details, you can read the full article here.

Implement a BSTIterator class that represents an iterator over the in-order traversal of a Binary Search Tree.

You should implement three functions

Write an algorithm that searches for a target value in an m x n integer matrix.

The matrix will have the following properties

Here’s the question on LeetCode.

We can solve this question by starting at the top-right of our array.

We compare our target value with the starting point.

If we’ve exceeded the bounds of our matrix, then we return False.

The time complexity is O(m + n) because every iteration we eliminate one row or one column when we move down or left. 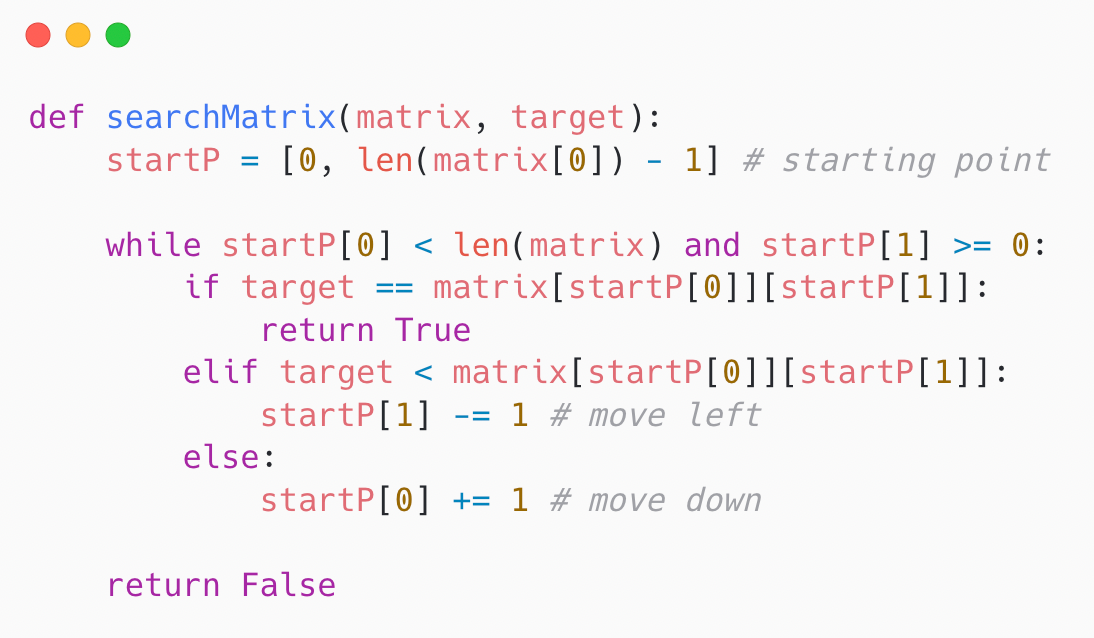