We also have a solution to our last difficult interview question. Plus, a new question from Uber.

It’s extremely important to carefully think about your API design from the beginning.

It’s also extremely difficult to make breaking changes to an API after shipping so bad API design can be hard to fix.

In order to avoid this at Slack, they’ve published some principles around API design. 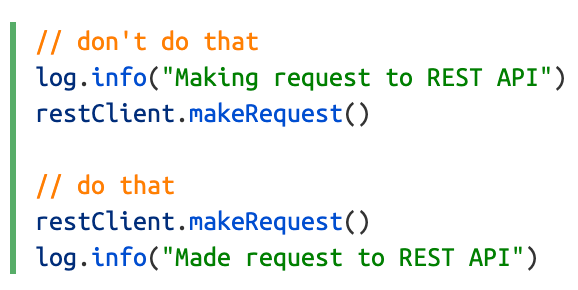 The issue was with DNS, which is a pretty common point of failure (Microsoft Azure’s outage on April 1rst of this year was also due to DNS).

More specifically, the issue was with Facebook’s Autonomous System and the BGP updates it was broadcasting.

Border Gateway Protocol (BGP) is the network protocol that exchanges routing information between these Autonomous Systems on the internet. Part of BGP’s job is to look at all the available paths that data could travel and picks the best route.

But, in order for BGP to do that, the Autonomous System has to announce it’s prefix routes to the internet using BGP.

So, Facebook’s Autonomous System made BGP announcements withdrawing all the routes to their prefixes at 3:40 PM UTC.

A Reddit user named ramenporn said he worked at Facebook’s Recovery Team and provided an update on what the issue was (he quickly deleted his account after, since Facebook is a publicly traded company and he probably realized he wasn’t authorized to give statements).

As many of you know, DNS for FB services has been affected and this is likely a symptom of the actual issue, and that's that BGP peering with Facebook peering routers has gone down, very likely due to a configuration change that went into effect shortly before the outages happened (started roughly 1540 UTC).

There are people now trying to gain access to the peering routers to implement fixes, but the people with physical access is separate from the people with knowledge of how to actually authenticate to the systems and people who know what to actually do, so there is now a logistical challenge with getting all that knowledge unified.

Part of this is also due to lower staffing in data centers due to pandemic measures.

I believe the original change was 'automatic' (as in configuration done via a web interface). However, now that connection to the outside world is down, remote access to those tools don't exist anymore, so the emergency procedure is to gain physical access to the peering routers and do all the configuration locally.

So, because Facebook’s internal network is entirely self-contained, this meant that Facebook employees couldn’t remotely fix the bad config.

They had to gain physical access to the peering routers.

At 9 PM UTC, there was renewed BGP activity from Facebook’s network which peaked at 9:17 PM UTC.

By 9:20 PM UTC, “www.facebook.com” was resolving to a valid IP address again on Cloudflare.

Find 3 integers in nums such that the sum is closest to target.

Return the sum of the 3 integers.

Each input will have exactly one solution

There are 3 ways you can generate “rabbit” from “rabbbit”

Now, we’ll iterate through the characters in s from sCounter to the end of s.

For each character, we’ll check if it’s equal to the character at index tCounter in t.

If it is, then we have a possible matching subsequence and we’ll explore this further by recursively calling _numDistinct on the next character in s and t.

Our base case is if tCounter == len(t). That means we’ve reached the end of t and found a valid subsequence.

If tCounter != len(t) but sCounter == len(s), then that’s our second base case. That means we’ve reached the end of s but we haven’t found a valid subsequence.

In order to avoid repeat computations, we’ll add a memo table as a cache.

Here’s the Python 3 code for the top down solution.

However, this code will still give you a “time limit exceeded” error on LeetCode.

In order to pass all test conditions, you’ll have to flip the code around to come up with the bottom-up DP solution.

You can do that with a DP table.

Here’s the Python 3 code for the bottom up solution. 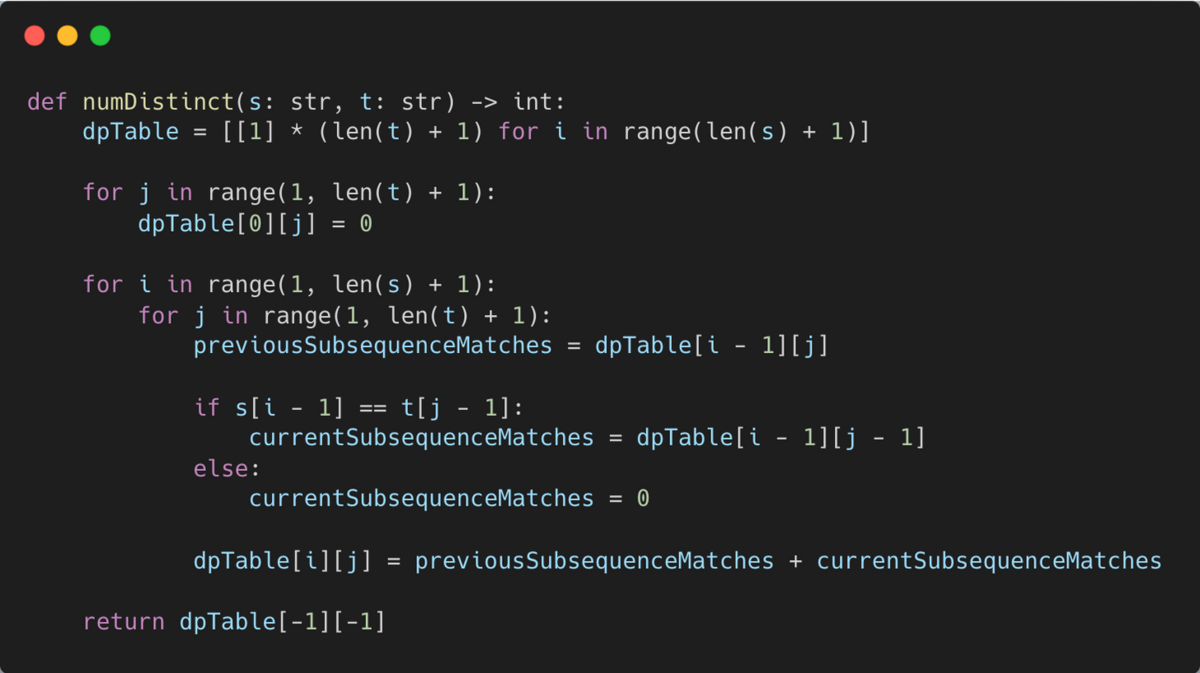