We have a solution to our last coding interview question on linked lists, plus a new question from Amazon.

In our last summary (included below), we talked about GitHub’s transition from a monolith to microservices.

This summary is on GitHub’s blog post on how they built tooling to make partitioning their database easier.

Until recently, GitHub was built around one MySQL database cluster that housed a large portion of the data used for repositories, issues, pull requests, user profiles, etc.

This MySQL cluster was called mysql1.

This created challenges around scaling and issues around reliability since all of GitHub’s core features would stop working if the database cluster went down.

The tooling GitHub built made partitioning much easier by allowing for

Since implementing these changes, GitHub has seen a significant decrease in load on the main database cluster.

Here’s a rundown on the technical changes GitHub made to implement Virtual Partitions and moving data without downtime.

In order to implement Virtual Partitioning, GitHub first created schema domains, where a schema domain describes a tightly coupled set of database tables that are frequently used together in queries.

An example of a schema domain is the gists schema domain, which consists of the tables gists, gist_comments, and starred_gists. These tables would remain together after a partition.

GitHub stored a list of all the schema domains in a YAML configuration file. Here’s an example of a YAML file with the gists, repositories and users schema domains and their respective tables. 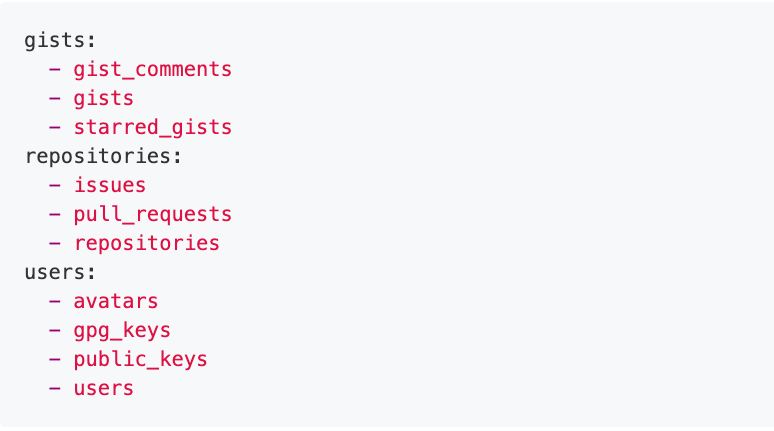 Now, GitHub needed to enforce these schema domains. They want to make sure that application code doesn’t have SQL queries or transactions that span schema domains.

They enforce this with SQL Linters.

GitHub has two SQL linters (a Query linter and a Transaction linter) that enforce virtual boundaries between the schema domains.

They identify any violating queries and transactions that span schema domains and throw an exception with a helpful message for the developer.

Transactions aren’t allowed to span multiple schema domains because after the partition, those transactions will no longer be able to guarantee consistency.

MySQL transactions guarantee consistency across tables within a database, but partitioned schema domains will be in different database clusters.

Now that GitHub has virtually isolated schema domains, they can physically move their schema domains to separate database clusters.

In order to do this on the fly, GitHub uses Vitess. Vitess is an open source database clustering system for MySQL that was originally developed at YouTube.

Vitess was serving all YouTube database traffic from 2011 to 2019, so it’s battle-tested.

GitHub uses Vitess’ vertical sharding feature to move sets of tables together in production without downtime.

To do that, GitHub uses Vitess’ VTGate proxies as the endpoint for applications to connect to instead of direct connections to MySQL.

For more details, you can read the full blog post here.

You are given an array of integers sorted in non-decreasing order.

Write a function that removes any duplicates in the array so that each element appears only once.

Your function must use constant space, so your space complexity must be O(1).

The elements in the array after the first k elements can be whatever you choose.

Your function should run in O(n) or better.

Given a linked list, swap every two adjacent nodes and return its head.

You must solve the problem without modifying the values in the list’s nodes. Only the nodes themselves can be changed.

We can solve this question quite elegantly by using recursion.

Our base case will be if either head or head.next is None.

If so, then we can just return head.

Otherwise, we’ll recursively call our swapPairs function on head.next.next, so that it swaps the nodes for the rest of our linked list (the nodes after the first 2 nodes).

Now, we have to swap the first 2 nodes, head and head.next. We do this using a temporary variable and then we return the new head (which was previously head.next). 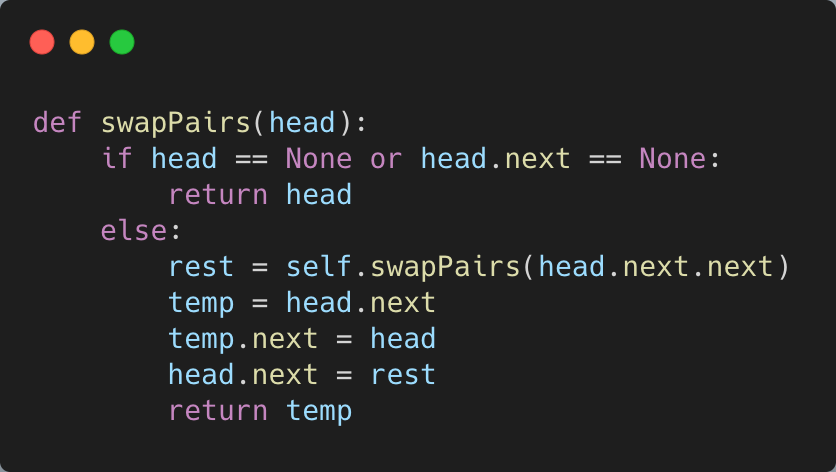