A One Person Startup's Tech Stack

We have a solution to our last coding interview question on Tries, plus a new question from Google.

Introduction to the Theory of Computation

This is a fantastic (free) undergraduate-level textbook on the Theory of Computation.

We’ll be giving a (very) brief intro to the Theory of Computation below.

Computational Theory revolves around the question of “What are the fundamental capabilities and limitations of computers?”

The goal is to develop formal mathematical models of computation that are useful frameworks of real-world computers.

An example of a model is the RAM (Random-access Machine) Model of Computation which is useful for computational complexity analysis.

When you’re finding the Big O (worst-case time complexity) of an algorithm, you’re using the RAM model to make assumptions about the runtime of certain operations (assigning a variable is constant time, basic operations are constant time, etc.)

Computational Theory can be split into 3 main areas

The textbook delves into all 3 of these areas so check it out if you’re interested!

The Boring Technology Behind a One-Person Internet Company

Listennotes is a podcast search engine and database started by Wenbin Fang. The site gets nearly 2 million visits per month (according to SimilarWeb) and is maintained entirely by Wenbin (he’s the only employee).

Wenbin wrote a blog post in 2018 on the technology stack he uses to power the site and we’ll be summarizing it here. Some parts of the tech stack have been changed (and the site has scaled significantly since the post was written), but it’s still quite instructive.

As of May 2019, ListenNotes ran on 20 production servers on AWS. The servers are set up to make horizontal scaling simple. 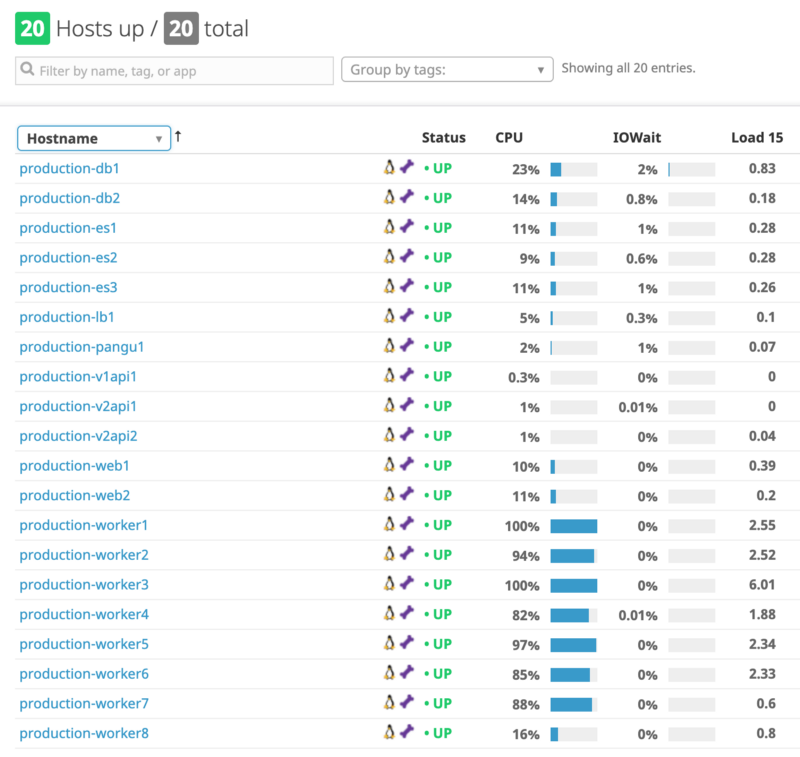 The backend is written in Django with Ubuntu as the OS of choice.

The data store is Postgres. Wenbin had a lot of development and operational experience with Postgres from his past projects, so that’s the main reason he picked it.

He also uses Redis for things like caching, stats, etc.

Elasticsearch is used for indexing podcasts and serving search queries.

Wenbin subscribes to the monolithic repo philosophy so there’s only one listennotes repo which contains all the frontend and backend code (and various scripts). It is hosted on a GitHub private repo.

The web frontend for ListenNotes is built with React, Redux, Webpack, etc.

ListenNotes provides an audio player so you can listen to a podcast as you browse the site, and the audio player is a modified version of react-media-player.

To quickly provision machines, Wenbin uses Ansible. He has a couple of YAML files that specify what type of servers need to have what configuration files and what software.

He can then spin up a server with all the correct configuration files & software with just one click.

He also uses Ansible to deploy code to production.

The tech stack is sophisticated enough to run a SaaS application with millions of users but it’s also simple enough so that Wenbin can maintain the entire thing by himself. 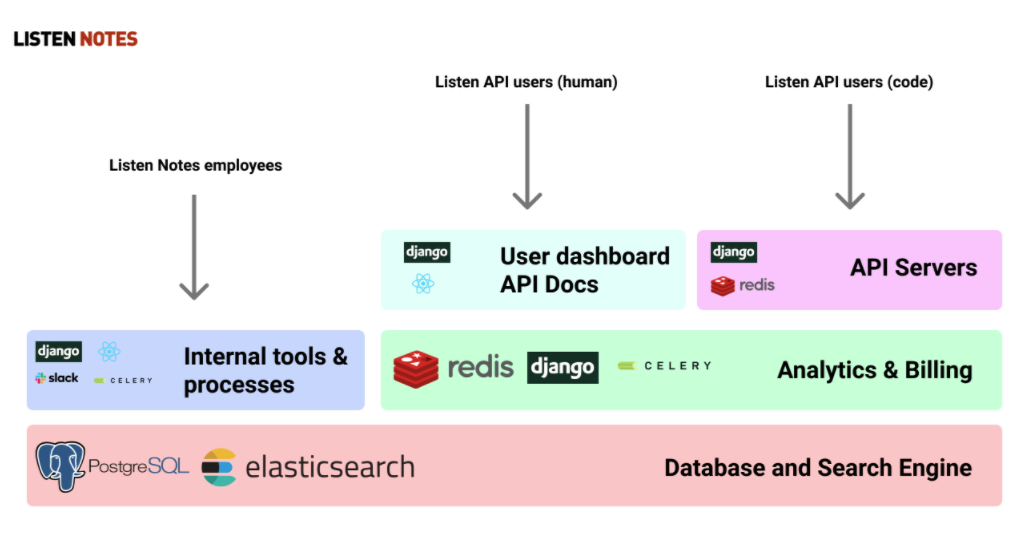 You are given a doubly-linked list where each node also has a child pointer.

The child pointer may or may not point to a separate doubly linked list.

These child lists may have one or more children of their own, and so on, to produce a multilevel data structure.

Design a data structure that supports adding new words and finding if a string matches any previously added string.

We can solve this question using the Trie data structure.

In order to build a trie, we’ll create another class called TrieNode, where each instance represents a node in our trie.

TrieNode will contain a variable called val, which will be the letter in the dictionary that this node represents.

It will also have a hash table called children, which keeps track of all the child nodes for this TrieNode.

Also, it’ll have a boolean variable called isEnd. isEnd will keep track of whether this TrieNode is the last word for any of the words in our dictionary.

Here’s the Python 3 code for TrieNode 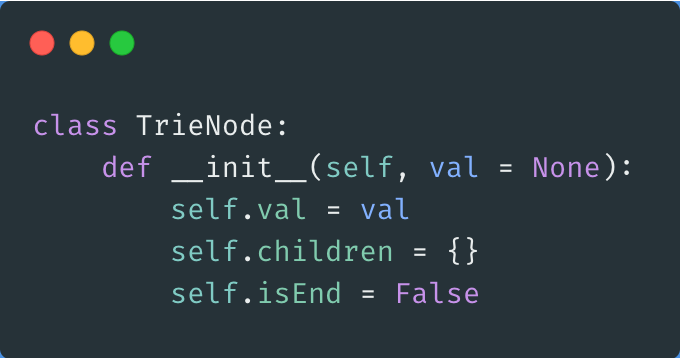 Now, we have to create the WordDictionary class.

This class will have 3 methods

In our constructor, we’ll create the root node for the trie data structure that will hold our words. 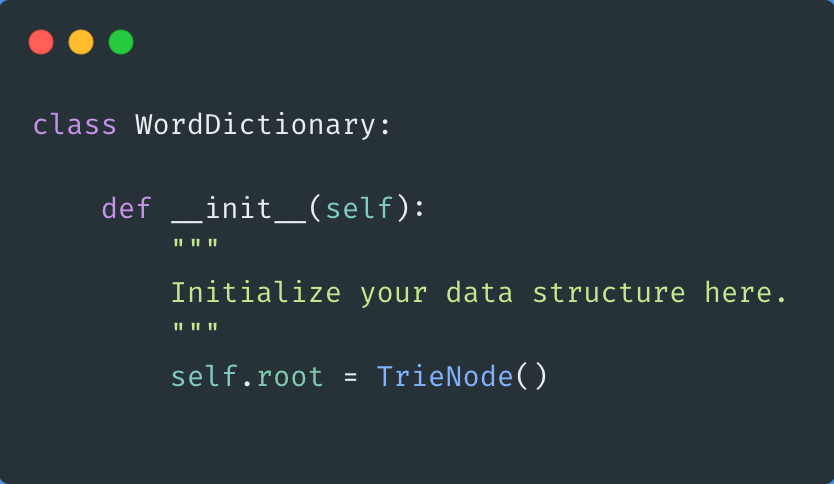 Inside of our addWord function, we want to add the word to our trie.

We can do this by iterating through all the letters in our word.

At the end of the path, we’ll set the isEnd flag to True, to indicate that this node represents the end of a word in our dictionary. 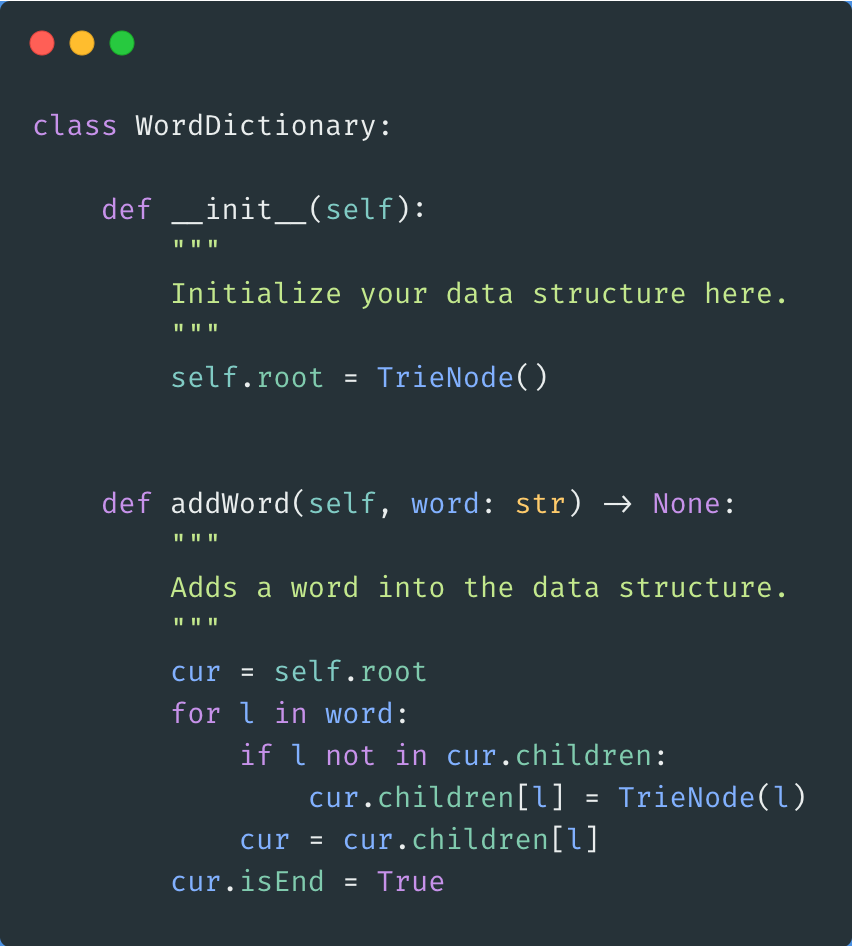 The search function does a depth-first search on our trie, looking for the given word.

If the word contains a “*”, then our DFS function will look through all the children for that specific node. 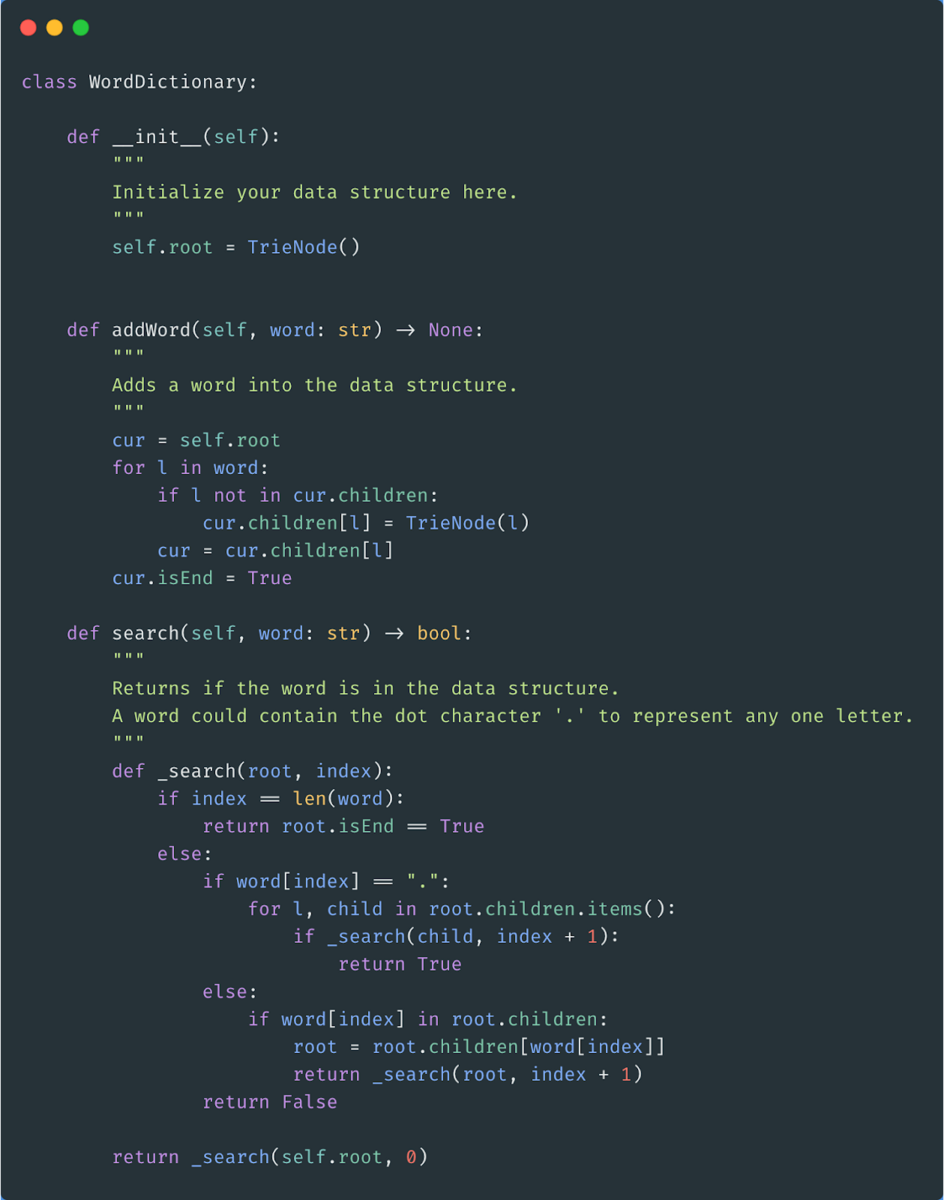 What’s the time and space complexity of the functions in our solution? Reply back with your answer and we’ll tell you if you’re right/wrong.

We also have one of our previous tech snippets in case you missed it!