We also have a solution to yesterday’s interview question. Plus, a new question from Facebook.

If you’re not signed up for Quastor, be sure to join!

Now, users are downloading far fewer applications and are instead using them through the browser.

Offline-First is a paradigm in response to this which states that the software must work as well offline as it does online.

RxDB wrote some awesome opinion articles on the Offline-First paradigm, which you can read here (Offline First explained) and here (Downsides of Offline First).

The first question is, why even care about offline-first?

Internet connections are getting much more reliable (especially for mobile devices), so it seems like offline-first might be a waste of time.

So, why would you want to rely on browser-side storage?

(By the way, you can read about all the options for browser side storage in a previous email here.)

Some reasons why you should care are

The article discusses a couple more pros that you can read here.

Now, let’s look at the cons of Offline-First apps.

You can read more cons here.

There are 3 ways you can generate “rabbit” from “rabbbit”

Every level of the tree is filled with values from 1 to infinity.

However, the ordering of the nodes has been flipped for even numbered rows, where they go from largest to smallest.

Given the label of a node in this tree, return the labels in the path from the root of the tree to that row.

Can you solve this in O(log n) time?

Your first instinct might be to think of some kind of tree traversal or binary search algorithm.

You don’t need to interact with a binary tree data structure to solve this question!

Instead, try and work backwards.

We’re at the label node, but can we figure out what the parent node is based off the properties of a complete tree?

We can find what level of the tree we’re in by taking int(log(label)) where it’s log base 2. The first level will be level 0.

Now that we have the first node, we can find our current node’s position in the level by subtracting label and first.

Now, we repeat the same exact process until we come to our root node, which has the label 1.

While doing the process, we’ll append our labels on to an array that will keep track of the path. 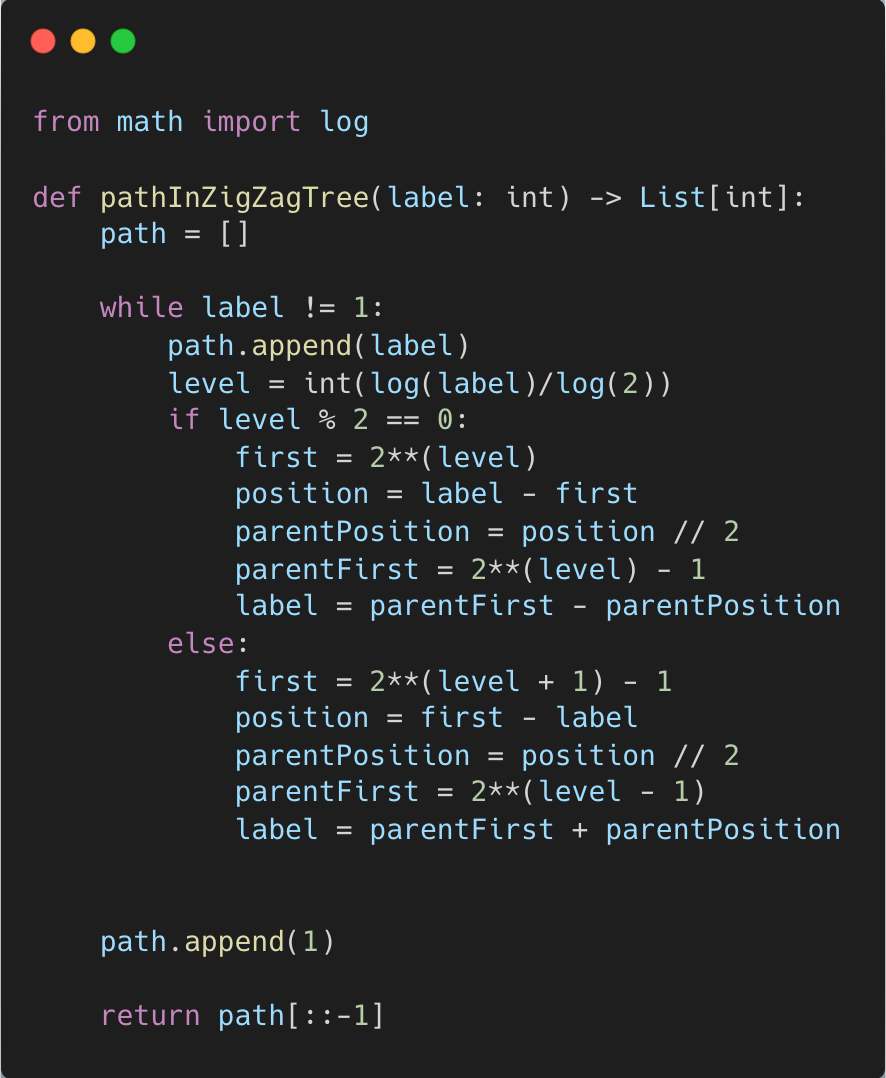