To fix this, Twitter adopted Splunk for their logging system. After the switch, they’ve been able to ingest 4-5 times more logging data with faster queries.

Kristopher Kirland is a senior Site Reliability Engineer at Twitter and he wrote a great blog post on this migration and some of the challenges involved (published August 2021).

Before Loglens (the legacy centralized logging system), Twitter engineers had great difficulty with browsing through the different log files from their various backend services. This would be super frustrating when engineers were investigating an ongoing incident.

To solve this, they designed Loglens as a centralized logging platform that would ingest logs from all the various services that made up Twitter.

Their goals for this platform were

Log files would be written to local Scribe daemons, forwarded onto Kafka and then ingested into the Loglens indexing system and written to HDFS.

While running Loglens as their logging backend, the platform ingested around 600k events per second per datacenter.

However, only 10% of the logs ingested were actually submitted. The other 90% were discarded by the rate limiter to avoid overwhelming Loglens.

The logging system had very little resource investment (little investment was one of the goals) and that led to a poor developer experience with the platform.

Twitter engineers decided to switch to Splunk for their centralized logging platform.

They chose Splunk because it could scale to their needs; ingesting logs from hundreds of thousands of servers in the Twitter fleet. Splunk also offers flexible tooling that satisfies the majority of Twitter’s log analysis needs.

Due to the loosely coupled design of Loglens, migrating to Splunk was pretty straightforward.

Twitter engineers created a new service to subscribe to the Kafka topic that was already in use for Loglens, and then they forwarded those logs to Splunk. The new service is called the Application Log Forwarder (ALF). 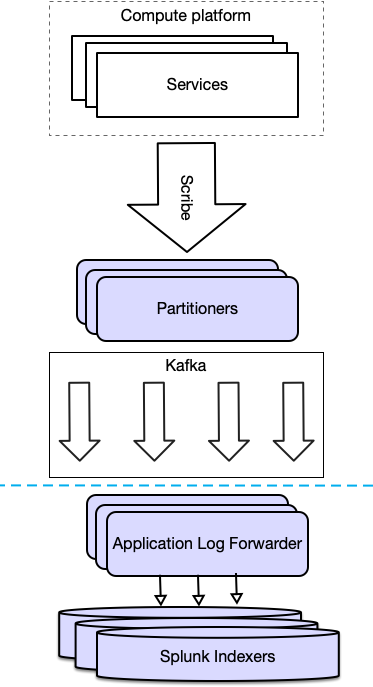 Twitter uses this set up for the majority of their logs (over 85%) but they also use the Splunk Universal Forwarder. With the Universal Forwarder, they just install that application on each server in their fleet and it starts ingesting logs.

With Splunk, Twitter now has a much greater ingestion capacity compared to Loglens. As of August 2021, they collect nearly 42 terabytes of data per datacenter each day. That’s 5 million events per second per datacenter, which is far greater than what Twitter was able to do with Loglens.

They also gained some other features like greater configurability, the ability to save and schedule searches, complex alerting, a more robust and flexible query language, and more.

For more information, check out the full blog post here.

Hundreds of millions of videos are uploaded to Facebook every day.

In order to deliver these videos with high quality and little buffering, Facebook uses a variety of video codecs to compress and decompress videos. They also use Adaptive Bitrate Streaming (ABR).

We’ll first give a bit of background information on what ABR and video codecs are. Then, we’ll talk about the process at Facebook.

Progressive Streaming is where a single video file is being streamed over the internet to the client.

The video will automatically expand or contract to fit the screen you are playing it on, but regardless of the device, the video file size will always be the same.

There are numerous issues with progressive streaming.

Adaptive Bitrate Streaming is where the video provider creates different videos for each of the screen sizes that he wants to target.

The player client can detect the user’s bandwidth and CPU capacity in real time and switch between streaming the different encodings depending on available resources.

You can read more about Adaptive Bitrate Streaming here.

Transmitting uncompressed video data over a network is impractical due to the size (tens to hundreds of gigabytes).

Video codecs solve this problem by compressing video data and encoding it in a format that can later be decoded and played back.

The various codecs have different trade-offs between compression efficiency, visual quality, and how much computing power is needed.

You can read more about video codecs here.

So, you upload a video of your dog to Facebook. What happens next?

Next, Facebook’s video encoding system will try to further improve the viewing experience by using advanced codecs such as H264 and VP9.

The encoding job requests are each assigned a priority value, and then put into a priority queue.

A specialized encoding compute pool then handles the job.

Now, the Facebook web app (or mobile app) and Facebook backend can coordinate to stream the highest-quality video file with the least buffering to people who watch your video.

A key question Facebook has to deal with here revolves around how they should assign priority values to jobs?

The goal is to maximize everyone’s video experience by quickly applying more compute-intensive codecs to the videos that are watched the most.

Let’s say Cristiano Ronaldo uploaded a video of his dog at the same time that you uploaded your video.

They’ll also want to use more computationally-expensive codecs (that result in better compression ratios and quality) for Ronaldo.

Facebook’s solution for assigning priorities is the Benefit-Cost model.

It relies on two metrics: Benefit and Cost.

The encoding job’s priority is then calculated by taking Benefit and dividing it by Cost.

The benefit metric attempts to quantify how much benefit Facebook users will get from advanced encodings.

The effective predicted watch time is an estimate of the total watch time that a video will be watched in the near future across all of its audience.

Facebook uses a sophisticated ML model to predict the watch time. They talk about how they created the model (and the parameters involved) in the article.

The relative compression efficiency is a measure of how much a user benefits from the codec’s efficiency.

It’s based on a metric called the Minutes of Video at High Quality per GB (MVHQ) which is a measure of how many minutes of high-quality video can you stream per gigabyte of data.

Facebook compares the MVHQ of different encodings to find the relative compression efficiency.

This is a measure of the amount of logical computing cycles needed to make the encoding family (consisting of all the different resolutions) deliverable.

Some jobs may require more resolutions than others before they’re considered deliverable.

As stated before, Facebook divides Benefit / Cost to get the priority for a video encoding job.

After encoding, Facebook’s backend will store all the various video files and communicate with the frontend to stream the optimal video file for each user.

Your class should implement the functions enqueue, dequeue, and peek.

We can solve this question with a Trie (prefix tree).

The basic idea is we create a Trie with all the words in our dictionary.

Then, we can run a Breadth-First Search on our Trie to find the longest possible word.

We first create a TrieNode class that represents the individual nodes in our Trie.

Then, we create a Trie class.

The constructor for our Trie class is just initializing our Trie’s root node.

Now, we have to write a function to add words into our Trie.

We start at the root node of our Trie.

Then, we go letter by letter in the word we want to add.

We check if the letter is a child in the current node’s children.

If not, we add a new child TrieNode representing our letter.

Then, we can move down to our child letter.

After we’ve inserted all the letters in our word, we mark the last latter’s isEnd variable by changing it to the word itself.

This isEnd variable will be useful for our BFS.

So, now that we have a function to insert words, we can insert all the words in our dictionary inside the Trie.

After we’ve inserted all the words, it’s time to run a BFS on our Trie and find the longest word that is made up of other words in the list.

So, from our root node we’ll search any child that has an isEnd value.

For each of those nodes, we repeat the process. Search any of that node’s children that has an isEnd value, since those TrieNodes represent the end of words in our dictionary.

On each iteration, we’ll keep track of the longest word we’ve seen by looking at the value of isEnd.

Here’s the code for our BFS. 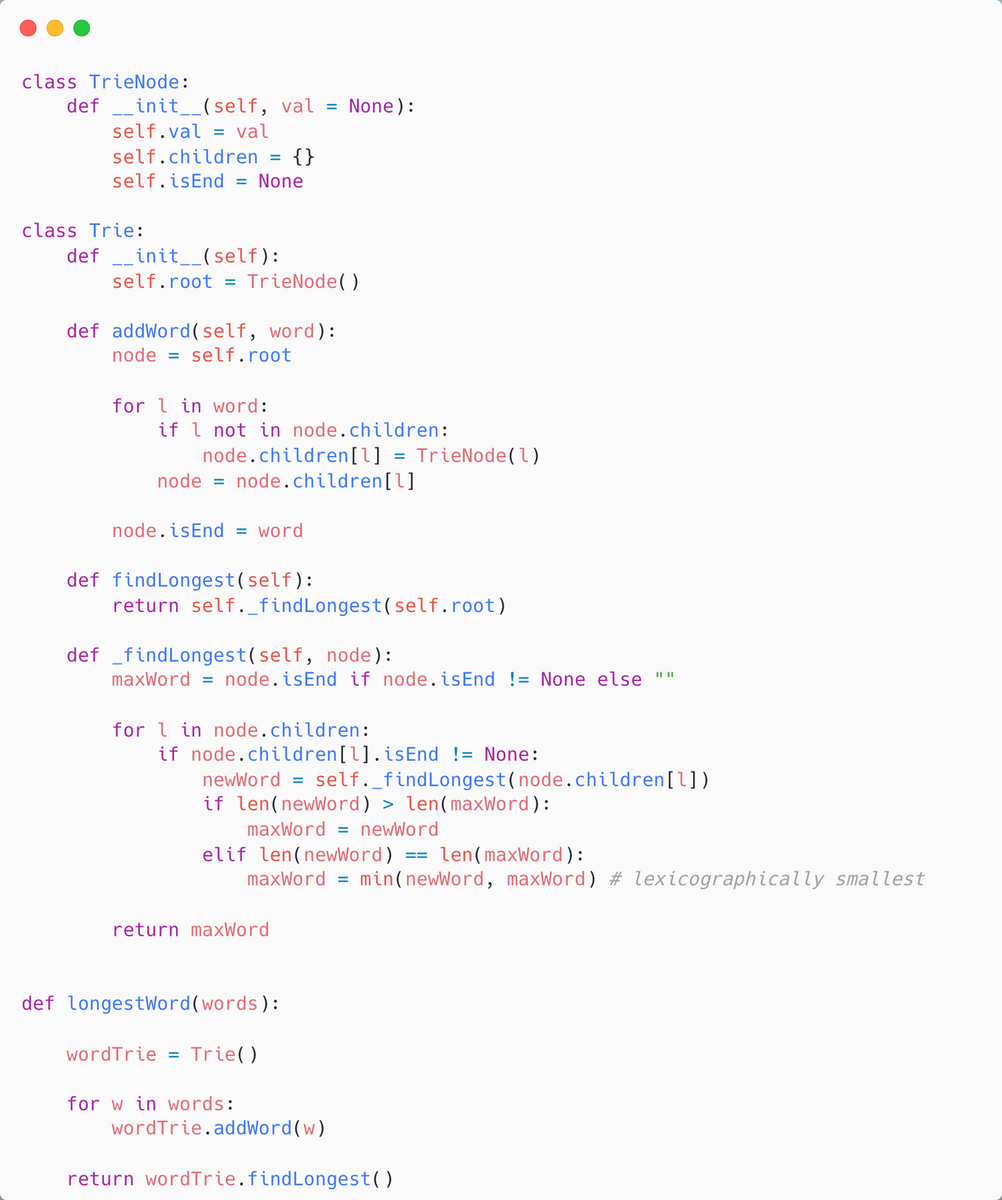