Microsoft acquires a company in the natural language processing space. Coinbase has a ridiculously amazing first quarter and will IPO soon. Plus, awesome resources on being a CTO!

Coinbase will go public Wednesday on NASDAQ after an amazing quarter

Due to the massive bull market in cryptocurrencies, Coinbase has had an absolutely amazing first quarter in 2021. The company attracted 13 million new users and generated earnings of $800 million on a revenue of $1.8 billion dollars. 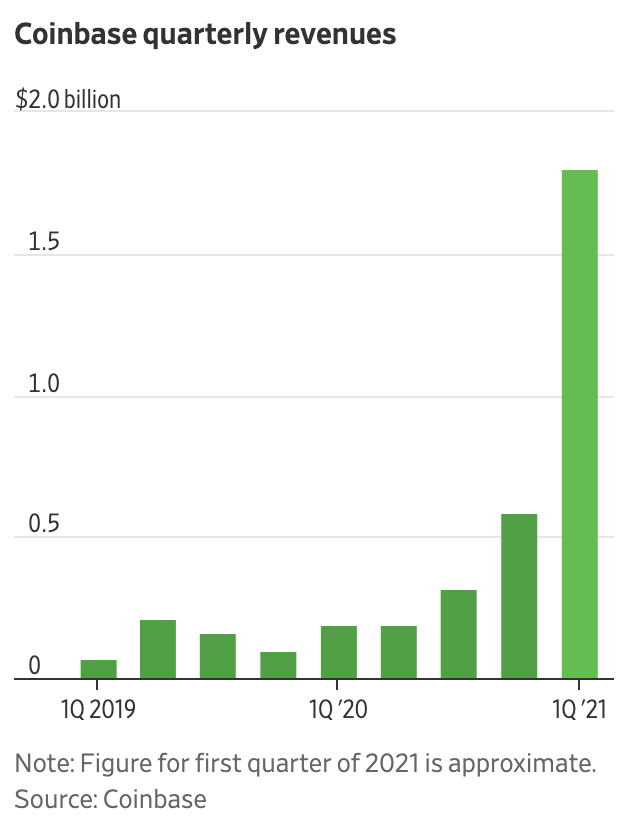 Users are happy to pay (so far) because of Coinbase’s marketing and ease of use. The volatility of cryptocurrencies make the fees less noticeable compared to traditional financial markets.

However, this may change as cryptocurrency investors become more fee conscious. This could cause Coinbase’s margins to drop as they’re forced to take less aggressive fees.

Although Coinbase is pre-IPO, you can trade pre-IPO contracts at places like FTX’s Cryptocurrency Derivatives Exchange.

On that exchange, Coinbase’s valuation is currently trading at $140 billion dollars, making the company more valuable than the investment bank Goldman Sachs and the exchange NASDAQ combined.

Nuance Communication is a pioneer in the speech recognition and natural language processing space. Their software formed the basis of Apple’s Siri voice assistant.

Currently, the largest part of Nuance is their machine learning software for healthcare. They build software for speech recognition for doctors and nurses to quickly input their patient notes into an electronic health systems (rather than manually typing it all in).

They also create conversational AI bots for use in chat and voice-based virtual assistants.

The company employs more than 1,600 language scientists, developers and engineers to build their NLP software.

Microsoft has been investing in the speech systems for years now, but with far less success. They’ve been working on a voice assistant named Cortana, but they’ve recently announced that they would stop supporting Cortana on smartphones.

Therefore, this acquisition could signal a renewed interest from Microsoft in the voice assistant space.

Microsoft certainly hasn’t been shy about large acquisitions over the past few years, with Satya Nadella making it a core part of the company’s strategy.

Over the past few years, Microsoft has acquired LinkedIn, Github, Mojang (makers of Minecraft) and has tried to acquire TikTok. Currently, there’s rumors that Microsoft has been holding talks to acquire Discord, the popular messaging platform for gamers, for more than $10 billion dollars.

You are given an M x N matrix where each row and each column is sorted in ascending order.

Write a method to find an element in the most efficient way possible.

You are given an array filled with letters and numbers.

Find the longest subarray with an equal number of letters and numbers.

If there are multiple results, then return the subarray with the lowest starting index.

We can solve this question in a single pass of the input array.

As we iterate through our input array, we’ll count the amount of numbers and letters we’ve seen so far.

If we ever come across the same difference again (the current difference between numbers and letters is already in our hash table), then that means that between the earlier index and our current index, there are an equal amount of letters and numbers.

Therefore, we can find the length of the subarray between that earlier index and our current index. If this is the longest subarray with equal amounts that we’ve seen so far, then we’ll store it as our longest subarray.

Then we can continue iterating through the array.

Once we’ve finished iterating through the array, we can just return the longest subarray we found.