We have a solution to our last coding interview question on Linked Lists, plus a new question from Facebook.

LinkedIn is the world’s largest professional social networking site with 800 million users from over 200 countries.

In order to run analytics workloads on all the data generated by these users, LinkedIn relies on Hadoop.

More specifically, they store all this data on Hadoop Distributed File System (HDFS).

HDFS was based on Google File System (GFS), and you can read our article on GFS here.

Over the last 5 years, LinkedIn’s analytics infrastructure has grown exponentially, doubling every year in data size and compute workloads.

In 2021, they reached a milestone by storing 1 exabyte of data (1 million terabytes) across all their Hadoop clusters.

Despite the massive scale, the average latency for RPCs (remote procedure calls) to the cluster is under 10 milliseconds. 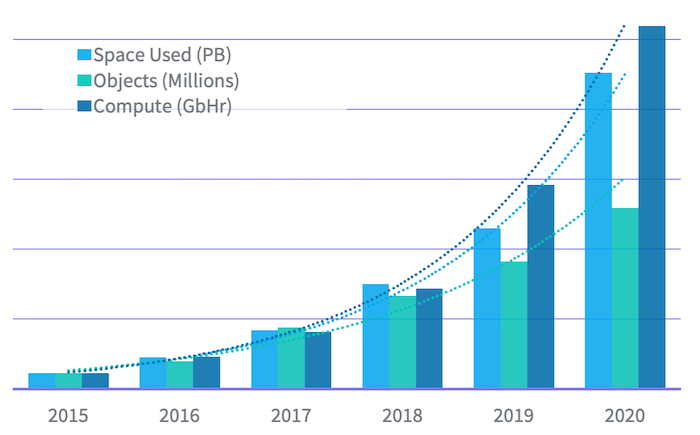 In 2015, the largest Hadoop cluster stored just over 20 petabytes of data.

It took just 5 years for that cluster to grow to over 200 petabytes of data.

In the article, LinkedIn engineers talk about some of the steps they took to ensure that HDFS could scale to 500 terabytes.

With HDFS, the file system metadata is decoupled from the data.

An HDFS cluster consists of two types of servers: a NameNode server and a bunch of DataNode servers.

The DataNodes are responsible for storing the actual data in HDFS. When clients are reading/writing data to the distributed file system, they are communicating directly with the DataNodes.

The NameNode server keeps track of all the file system metadata like the directory tree, file-block mappings (Hadoop breaks up files into 128 megabyte units called data blocks), which block is stored on which DataNodes, etc.

The NameNode also helps coordinate all the action in HDFS.

A client will first ask NameNode for the location of a certain file. NameNode will respond with the DataNode that contains that file and the client can then read/write their data directly to that DataNode server.

If your NameNode server goes down, then that’s no bueno. Your entire Hadoop cluster will be down as the NameNode is a single point of failure.

Also, when you’re operating at the scale of hundreds of petabytes in your cluster, restarting NameNode can take more than an hour. During this time, all jobs on the cluster must be suspended.

This is a big problem if you have a 500 petabyte cluster.

When you have clusters that large, it becomes extremely expensive to have downtime since a massive amount of processes at the organization rely on that cluster (that cluster accounts for half of all the data at LinkedIn).

Additionally, upgrading the cluster also becomes an issue since you have to restart the NameNode. This results in hours of additional downtime.

Fortunately, Hadoop 2 introduced a High Availability feature to solve this issue. With this feature, you can have multiple replicated NameNode servers.

The way it works is that you have a single Active NameNode that receives all the client’s requests.

The Active NameNode will publish it’s transactions into a Journal Service (LinkedIn uses Quorum Journal Manager for this) and the Standby NameNode servers will consume those transactions and update their namespace state accordingly.

This keeps them up-to-date so they can take over in case the Active NameNode server fails.

First, one of the Standby NameNodes is upgraded with the new software and restarted.

Then, the Active NameNode fails over to the upgraded standby and is subsequently upgraded and restarted.

After, the DataNodes can also be restarted with the new software. The DataNode restarts are done in batches, so that at least one replica of a piece of data remains online at all times.

Previously, we talked about how the NameNode server will keep track of all the file system metadata.

The NameNode server keeps all of this file system metadata in RAM for low latency access.

As the filesystem grows, the namespace will also grow proportionally.

This adds the requirement for periodic increases of the Java heap size on the NameNode server (Hadoop is written in Java).

LinkedIn’s largest NameNode server is set to use a 380 gigabyte heap to maintain the namespace for 1.1 billion objects.

An object will first start in the young generation, and as it survives garbage collection events, it will get promoted to eventually end up in the old generation.

As the workload on the NameNode increases, it generates more temporary objects in the young generation space.

The growth of the namespace increases the old generation.

LinkedIn engineers try to keep the storage ratio between the young and old generations at around 1:4.

By keeping the young and Old spaces appropriately sized, LinkedIn can completely avoid full garbage collection events (where both the Young and Old generations are collected), which would result in a many-minutes-long outage in the NameNode.

NameNode is a highly multithreaded application and it uses a global read-write lock to control concurrency.

The write lock is exclusive (only one thread can hold it and write) while the read lock is shared, allowing multiple reader threads to run while holding it.

With fair locking, the NameNode server frequently ends up in situations where writer threads block reader threads (where the readers could be running in parallel).

Non-fair mode, on the other hand, allows reader threads to go ahead of the writers.

This results in a substantial improvement in overall NameNode performance, especially since the workload is substantially skewed towards read requests.

HDFS is optimized for maintaining large files and providing high throughput for sequential reads and writes.

As stated before, HDFS splits up files into blocks and then stores the blocks on the various DataNode servers.

Each block is set to a default size of 128 megabytes (LinkedIn has configured their cluster to 512 megabytes).

If lots of small files (the file size is less than the block size) are stored on the HDFS cluster, this can create issues by disproportionately inflating the metadata size compared to the aggregate size of the data.

Since all metadata is stored in the NameNode server’s RAM, this becomes a scalability limit and a performance bottleneck.

You can read the details on how they split off the data from the main cluster to the satellite clusters in the article.

The main limiting factor for HDFS scalability eventually becomes the performance of the NameNode server.

However, LinkedIn is using the High Availability feature, so they have multiple NameNode servers (one in Active mode and the others in Standby state).

This creates an opportunity for reading metadata from Standby NameNodes instead of the Active NameNode.

Then, the Active NameNode can just be responsible for serving write requests for namespace updates.

In order to implement this, LinkedIn details the consistency model they used to ensure highly-consistent reads from the Standby NameNodes.

Read the full details in the article.

Write a function to randomly generate a set of m integers from an array of size n.

Each element must have an equal probability of being chosen.

Introduction to the Theory of Computation

This is a fantastic (free) undergraduate-level textbook on the Theory of Computation.

We’ll be giving a (very) brief intro to the Theory of Computation below.

Computational Theory revolves around the question of “What are the fundamental capabilities and limitations of computers?”

The goal is to develop formal mathematical models of computation that are useful frameworks of real-world computers.

An example of a model is the RAM (Random-access Machine) Model of Computation which is useful for computational complexity analysis.

When you’re finding the Big O (worst-case time complexity) of an algorithm, you’re using the RAM model to make assumptions about the runtime of certain operations (assigning a variable is constant time, basic operations are constant time, etc.)

Computational Theory can be split into 3 main areas

The textbook delves into all 3 of these areas so check it out if you’re interested!

You are given a doubly-linked list where each node also has a child pointer.

The child pointer may or may not point to a separate doubly linked list.

These child lists may have one or more children of their own, and so on, to produce a multilevel data structure.

We can solve this question recursively.

We’ll have a recursive function called _flatten that takes in a linked list and flattens it.

_flatten will then return the head and the tail (last node) of the flattened linked list.

We’ll iterate through our linked list and check if any of the nodes have a child linked list.

Then, we’ll insert the flattened linked list inside of our current linked list after the current node.

After inserting it, we can continue iterating through the rest of our linked list checking for child nodes. 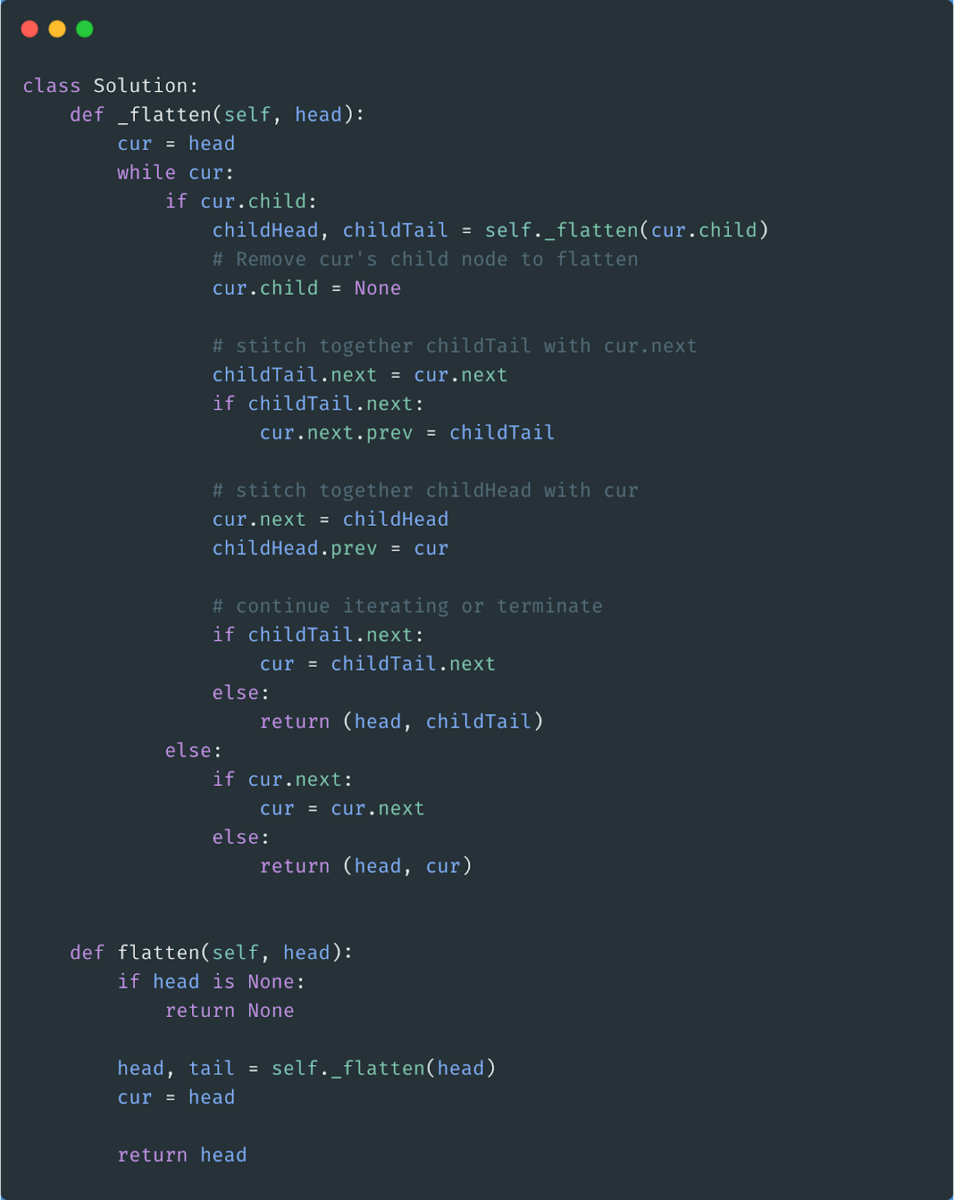 What’s the time and space complexity of the functions in our solution? Reply back with your answer and we’ll tell you if you’re right/wrong.