We have a solution to our last Apple interview question and a new question from Facebook.

Hundreds of millions of videos are uploaded to Facebook every day.

In order to deliver these videos with high quality and little buffering, Facebook uses a variety of video codecs to compress and decompress videos. They also use Adaptive Bitrate Streaming (ABR).

We’ll first give a bit of background information on what ABR and video codecs are. Then, we’ll talk about the process at Facebook.

Progressive Streaming is where a single video file is being streamed over the internet to the client.

The video will automatically expand or contract to fit the screen you are playing it on, but regardless of the device, the video file size will always be the same.

There are numerous issues with progressive streaming.

Adaptive Bitrate Streaming is where the video provider creates different videos for each of the screen sizes that he wants to target.

The player client can detect the user’s bandwidth and CPU capacity in real time and switch between streaming the different encodings depending on available resources.

You can read more about Adaptive Bitrate Streaming here.

Transmitting uncompressed video data over a network is impractical due to the size (tens to hundreds of gigabytes).

Video codecs solve this problem by compressing video data and encoding it in a format that can later be decoded and played back.

The various codecs have different trade-offs between compression efficiency, visual quality, and how much computing power is needed.

You can read more about video codecs here.

So, you upload a video of your dog to Facebook. What happens next?

Next, Facebook’s video encoding system will try to further improve the viewing experience by using advanced codecs such as H264 and VP9.

The encoding job requests are each assigned a priority value, and then put into a priority queue.

A specialized encoding compute pool then handles the job.

Now, the Facebook web app (or mobile app) and Facebook backend can coordinate to stream the highest-quality video file with the least buffering to people who watch your video.

A key question Facebook has to deal with here revolves around how they should assign priority values to jobs?

The goal is to maximize everyone’s video experience by quickly applying more compute-intensive codecs to the videos that are watched the most.

Let’s say Cristiano Ronaldo uploaded a video of his dog at the same time that you uploaded your video.

They’ll also want to use more computationally-expensive codecs (that result in better compression ratios and quality) for Ronaldo.

Facebook’s solution for assigning priorities is the Benefit-Cost model.

It relies on two metrics: Benefit and Cost.

The encoding job’s priority is then calculated by taking Benefit and dividing it by Cost.

The benefit metric attempts to quantify how much benefit Facebook users will get from advanced encodings.

The effective predicted watch time is an estimate of the total watch time that a video will be watched in the near future across all of its audience.

Facebook uses a sophisticated ML model to predict the watch time. They talk about how they created the model (and the parameters involved) in the article.

The relative compression efficiency is a measure of how much a user benefits from the codec’s efficiency.

It’s based on a metric called the Minutes of Video at High Quality per GB (MVHQ) which is a measure of how many minutes of high-quality video can you stream per gigabyte of data.

Facebook compares the MVHQ of different encodings to find the relative compression efficiency.

This is a measure of the amount of logical computing cycles needed to make the encoding family (consisting of all the different resolutions) deliverable.

Some jobs may require more resolutions than others before they’re considered deliverable.

As stated before, Facebook divides Benefit / Cost to get the priority for a video encoding job.

After encoding, Facebook’s backend will store all the various video files and communicate with the frontend to stream the optimal video file for each user.

Rust is the future of JavaScript Infrastructure

Lee Robinson is the head of developer relations for Vercel (the creators of NextJS).

He wrote a great blog post on how he’s seeing the JavaScript web ecosystem embrace the Rust programming language.

Rust is a fast, reliable, and memory-efficient systems language that’s been voted “most-loved by developers” for the past 6 years (according to the Stack Overflow Developer Survey).

In the past, the vast majority of tools in the JavaScript ecosystem were written in JavaScript or TypeScript.

But, there’s been a trend away from JavaScript towards using systems programming languages.

We’re now seeing the next generation of JavaScript tooling being built using Rust.

Lee goes through several tools across the JavaScript ecosystem.

SWC is an extensible Rust-based platform that can be used for compilation, bundling, minification, and more.

It’s used by tools like NextJS, Parcel and Deno.

Deno is a modern and secure runtime for JavaScript and TypeScript. It uses v8 and is built with Rust.

Deno is attempting to replace NodeJS, and it is written by the original creators of NodeJS.

esbuild is a JavaScript bundler and minifier.

Esbuild is what triggered the trend of building JavaScript tooling with systems programming languages like Go and Rust.

Lee also goes through some of the cons of Rust.

One is that Rust has a pretty steep learning curve. It’s a lower level of abstraction than what most web developers are used to.

Therefore, developers will have to think more about algorithms, data structures and memory management.

Additionally, Rust’s usage in the web community is still niche, but this is changing rapidly.

Read the full article for more of Lee’s thoughts.

You are given an array of integers where every integer occurs three times except for one integer, which only occurs once. Find and return the non-duplicated integer.

Rotate the matrix by 90 degrees clockwise. 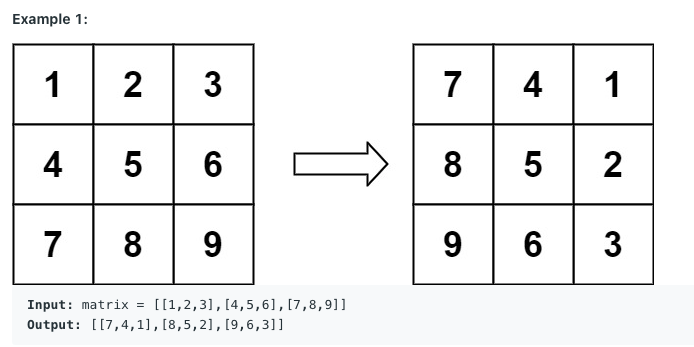 We can solve this question by breaking it down into two steps.

The transpose of a matrix is an operator which flips the matrix over it’s diagonal.

The row and column indices of the matrix are switched.

After finding the transpose of the matrix, you need to iterate through each of the rows and reverse the order of the elements in that row.

These two transformations are equivalent to a 90 degree clockwise rotation. 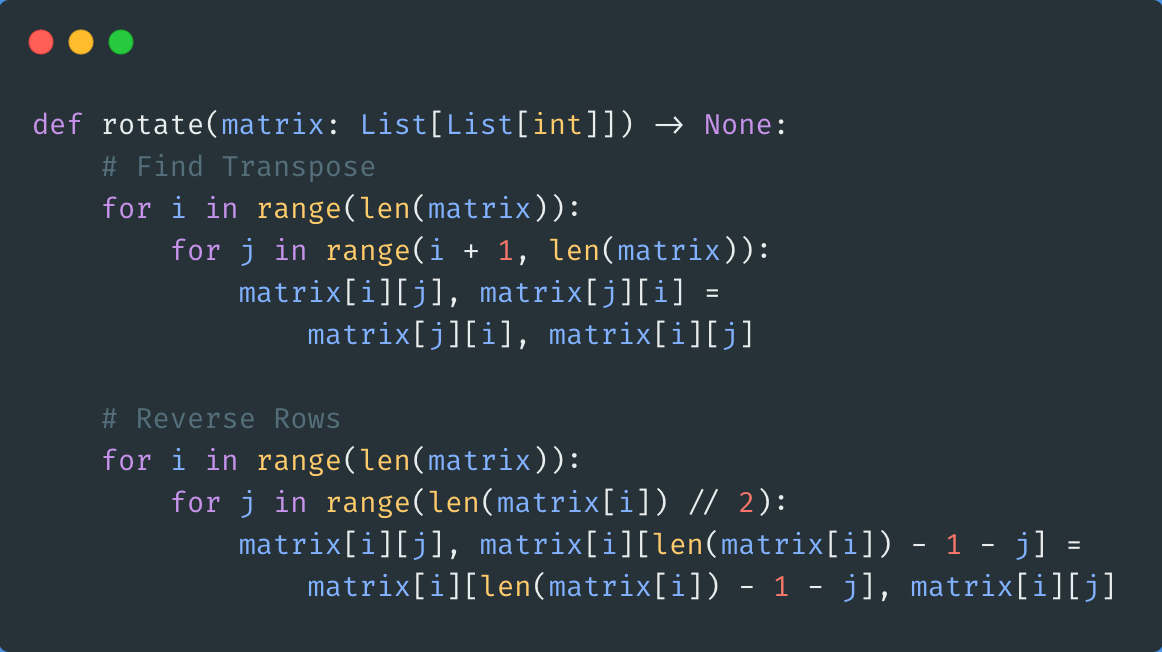