A dive into LLVM and Compilers (Plus Docker)

We also have a solution to our last coding interview question, plus a new question from Amazon.

An introduction to Compilers and LLVM

LLVM is an insanely cool set of low-level technologies (assemblers, compilers, debuggers) that are language-agnostic. They’re used for C, C++, Ruby, C#, Scala, Swift, Haskell, and a ton of other languages.

This post goes through an introduction to compiler design, the motivations behind LLVM, the design of LLVM and some extremely useful features that LLVM provides. We’ll be giving a summary below.

Back in 2000, open source programming language implementations (interpreters and compilers) were designed as special purpose tools and were monolithic executables. It would’ve been difficult to reuse the parser from a static compiler to do static analysis or refactoring.

Additionally, programming language implementations usually provided either a traditional static compiler or a runtime compiler in the form of an interpreter or JIT compiler.

It was very uncommon to see a language implementation that had supported both, and if there was then there was very little sharing of code.

The LLVM project changes this.

The most popular design for traditional static compilers is the three-phase design where the major components are the front end, the optimizer, and the back end.

The front end parses the source code (checking it for errors) and builds a language-specific Abstract Syntax Tree.

The AST is optionally converted to a new representation for optimization (this may be a common code representation, where the code is the same regardless of the input source code’s language).

The optimizer runs a series of optimizing transformations to the code to improve the code’s running time, memory footprint, storage size, etc.

The back end maps the optimized code onto the target instruction set.

It’s responsible for generating good code that takes advantage of the specific features of the supported architecture.

The most important part of this design is that a compiler can be easily adapted to support multiple source languages or target architectures.

Porting the compiler to support a new source language means you have to implement a compiler front end for that source language, but you can reuse the optimizer and back end.

The same applies for adding a new target architecture for the compiler. You just have to implement the back end and you can reuse the front end and optimizer.

The main issue was that this model was rarely realized in practice. If you looked at the open source language implementations prior to LLVM, you’d see that implementations of Perl, Python, Ruby, Java, etc. shared no code.

While projects like GHC and FreeBASIC were designed to compile to multiple different CPUs, their implementations were specific to the one source language they supported (Haskell for GHC).

Compilers like GCC suffered from layering problems and leaky abstractions. The back end in GCC uses front end ASTs to generate debug info and the front end generates back end data structures.

The LLVM project sought to fix this.

LLVM’s Implementation of the Three-Phase Design

In an LLVM-based compiler, the front end is responsible for parsing, validating, and diagnosing errors in the input code.

The LLVM IR is a complete code representation. It is well specified and is the only interface to the optimizer.

This means that if you want to write a front end for LLVM, all you need to know is what LLVM IR is, how it works, and what invariants it expects.

LLVM IR is a low-level RISC-like virtual instruction set and it is how the code is represented in the optimizer. It generally looks like a weird form of assembly language.

Here’s an example of LLVM IR and the corresponding C code. 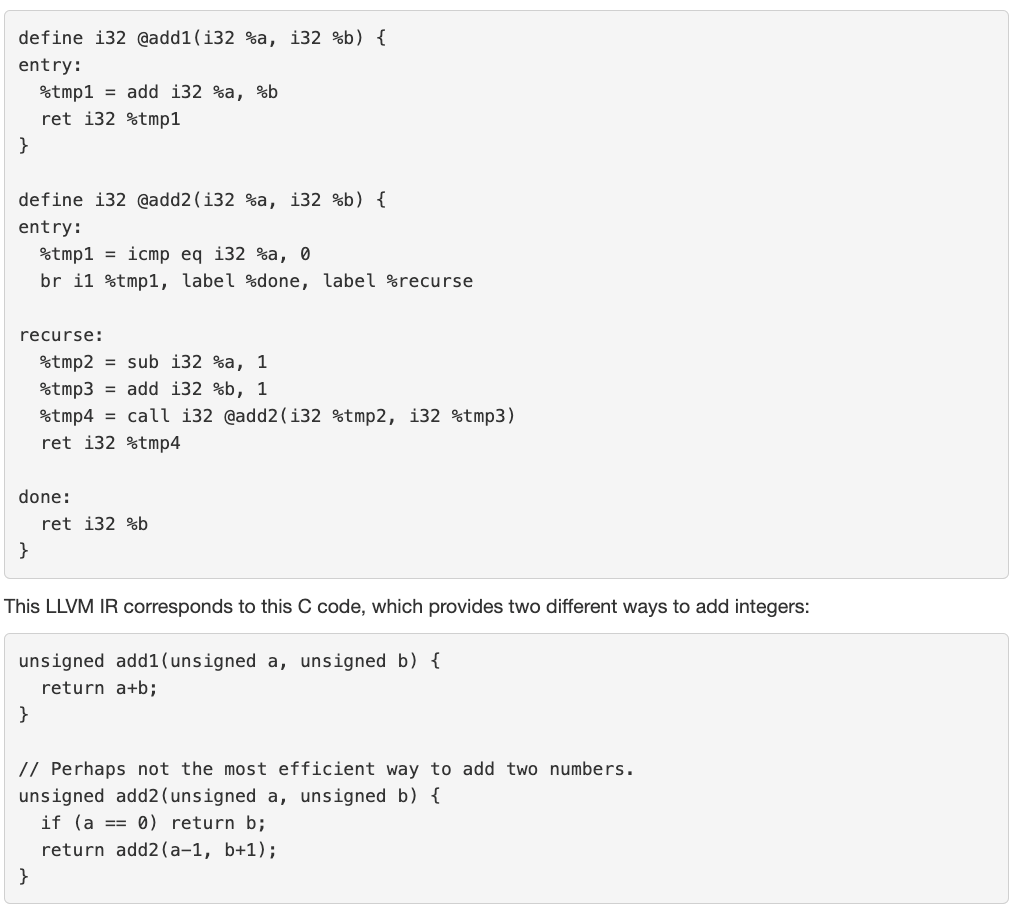 Now, the optimizer stage of the compiler takes the LLVM IR and optimizes that code.

An example of an optimization is pattern matching on basic math expressions like replacing X - X with 0 or (X*2)-X with X.

You can easily customize the optimizer to add your own optimizing transformations.

After the LLVM IR code is optimized, it goes to the back end of the compiler (also known as the code generator).

The code generator’s job is to produce the best possible machine code for any given target.

You can customize the back end and choose among the default passes (or override them) and add your own target-specific passes.

This allows target authors to choose what makes sense for their architecture and also permits a large amount of code reuse across different target back ends (code from a pass for one target back end can be reused by another target back end).

The code generator will output target specific machine code that you can now run on your computer.

For a more detailed overview and details on unit testing, modular design and future directions of LLVM, read the full post!

What is a Hypervisor? Why is it useful?

In the old days, you could only run a single application on a single server. Running multiple applications could be dangerous since the two apps might interfere with each other. One app could modify the file system in a way that the other didn’t expect, causing the other application to crash. Or, one app could depend on a specific version of MySQL, while the other app needed a different version. In a worst case scenario, one app might be written by a malicious user, who’s intentionally trying to get the other app to fail.

This single app - single server configuration becomes especially expensive if you’re trying to run a cloud computing business. When a user starts off, they definitely won’t be able to utilize the full power of the server, so you’re left wasting a ton of computational power.

Now, a cloud computing business can just run a hypervisor on their powerful servers, and the hypervisor will spin up a new virtual machine whenever a user wants to run an application on that server.

You might also run a hypervisor on your home computer if you want to quickly test out a new operating system. You can install VirtualBox on your Windows computer and run a copy of Ubuntu inside one of VirtualBox’s Virtual Machines on top of Windows.

What if we could use something more lightweight?

This is where containers come in. A Container is just a package for code for the application and all the dependencies that are needed. Each container shares the host OS and does not require its own OS. This allows containers to be spun up much faster and each container takes up much less space!

Now, when you have containers running on a computer, you’ll need some software to manage them. You’ll need a program to spin up new containers, manage their resource sharing, and shut them down. This program is called a container engine. If you’re into analogies… Container Engine is to Container as Hypervisor is to Virtual Machine.

In order to build Docker Images, you need a Dockerfile. A dockerfile is just a text file with a series of commands that tell the OS how to build the container.

Over the last couple of years, we’ve had a trend from Monolith architectures to Microservices. Rather than have your entire application running in a single application, you’ll break down the individual components (database, authentication, payment, logging, etc.) into different individual services, and expose each individual service with a REST API.

Each service is typically run in it’s own individual container and you’ll have to run several “copies” for each service for scalability (horizontal scaling).

Orchestrating this workflow and making sure the right containers are running at the right time is a hard job! You can end up with a workflow of thousands of containers!

This is where Kubernetes comes in. Kubernetes was originally made at Google and is a platform for “automating deployment, scaling and operations of application containers across clusters of hosts”.

It can be used in conjunction with Docker, where Docker Engine is used to individually boot up and manage the containers.

An image is represented by an m x n integer grid called image where image[i][j] represents the pixel value of the image.

You are given an image grid as well as three integers: sr, sc, and newColor.

You should perform a flood fill on the image starting from the pixel image[sr][sc].

To perform a flood fill, start at the starting pixel and change it’s original color to newColor.

After, fill the color of any pixels connected 4-directionally to those pixels that also have the same original color.

Return the modified image after performing the flood fill.

You are given the roots of two binary trees.

Return true if the second tree is a subtree of the first.

There are quite a few ways to solve this question.

One way is to find the preorder representation of both trees, convert them to strings and then see if the subtree’s preorder string is a substring of the other tree’s string. 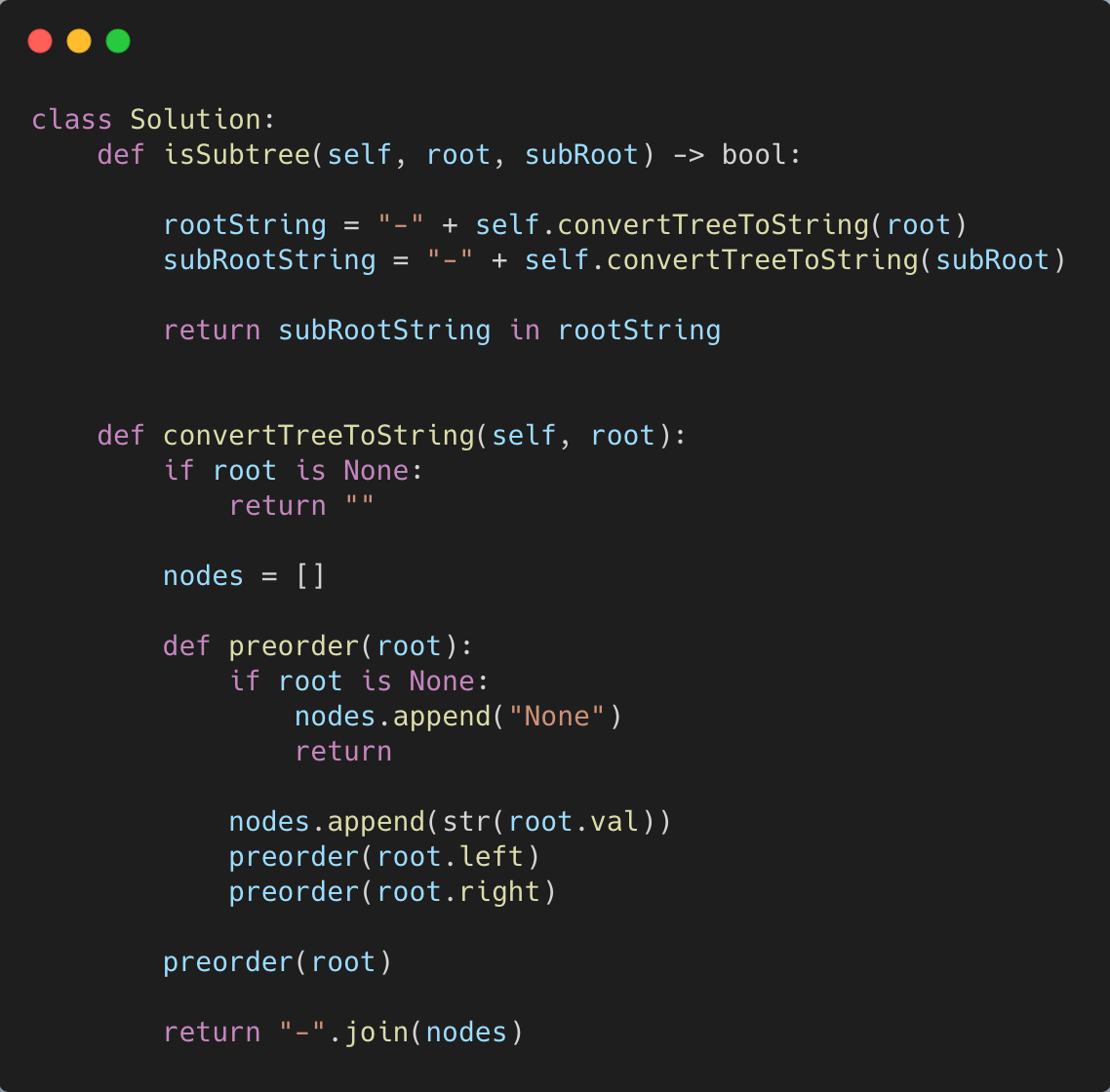