Bob Nystrom is a software engineer at Google, where he works on the Dart Programming language.

He wrote an amazing book called Crafting Interpreters, where he walks you through how programming language implementations work. In the book, you’ll build two interpreters, one in Java and another in C.

He published the entire book for free here, but I’d highly suggest you support the author if you have the means to do so.

His section on A Map of the Territory gives a fantastic introduction to programming language implementations, so here’s a summary of that section (with my own commentary added in).

(Not all languages have a specification. Python, for example, has the Python Language Reference, which is the closest thing to it’s specification.)

The language implementation is the actual software that allows you to run code from that programming language. Typically, an implementation consists of a compiler/interpreter.

The Architecture of a Language Implementation

Language implementations are obviously built differently, but there are some general patterns.

A language implementation can be subdivided into the following parts

LLVM is designed around a high-level assembly language that is named “intermediate representation” (here’s the language reference for LLVM IR) while CPython uses a data structure called the Control Flow Graph.

We’ll break down all of these concepts further…

As we said before, the front end is responsible for taking in your source code and turning it into an intermediate representation.

The first part is scanning (also known as lexical analysis). This is where the front end reads your source code and converts it into a series of tokens. A token is a single element of a programming language. It can be a single character, like a {, or it can be a word, like System.out.println.

After scanning and converting your source code into tokens, the next step is parsing.

A parser will take in the flat sequence of tokens and build a tree structure based on the programming language’s grammar.

The front end will also handle tasks like binding. This is where every identifier (variable, etc.) gets linked to where it’s defined.

If the language is statically typed, this is where type checking happens and type errors are reported.

In terms of storing this information, language implementations will do this differently.

All this information will be stored in some type of intermediate representation.

There are a couple of well established styles of intermediate representation out there. Examples include

Having a shared intermediate representation helps make your compiler design much more modular.

The middle end is responsible for performing various optimizations on the intermediate representation.

These optimizations are independent of the platform that’s being targeted, therefore they’ll speed up your code regardless of what the backend does.

An example of an optimization is constant folding: if some expression always evaluates to the exact same value, then do that evaluation at compile time and replace the code for the expression with the result.

With the result of that expression.

Other examples are removal of unreachable code (reachability analysis) and code that does not affect the program results (dead code elimination).

The back end is responsible for taking the optimized intermediate representation from the middle end and generating the machine code for the specific CPU architecture of the computer (or generating bytecode).

The back end may perform more analysis, transformations and optimizations that are specific for that CPU architecture.

If the back end produces bytecode, then you’ll also need another compiler for each target architecture that turns that bytecode into machine code.

An example is the Java Virtual Machine, which runs Java bytecode. You can reuse that backend and write frontends to handle different languages. Python, Kotlin, Clojure and Scala are a few examples of languages that have front ends that can convert that language into Java bytecode.

Here’s some snippets from our last email, in case you missed it!

You are given two sorted arrays that can have different sizes.

Return the median of the two sorted arrays.

Your class should implement the functions push, pop, peek, and empty.

A stack works based on the LIFO principle - last in, first out.

On the other hand, a queue works based on FIFO - first in, first out.

So, given that we have two stacks, one way of implementing this is to push every element through both stacks.

This will reverse the order twice, which means we’ll get our items back in the same order they were put in (first in, first out).

For the push method, we’ll push our items on to the first stack.

Then, when we pop, we’ll first pop everything off the first stack and push it onto the second stack (this is done with our _load function).

After doing that, we can pop an item off our second stack and return it to the user. 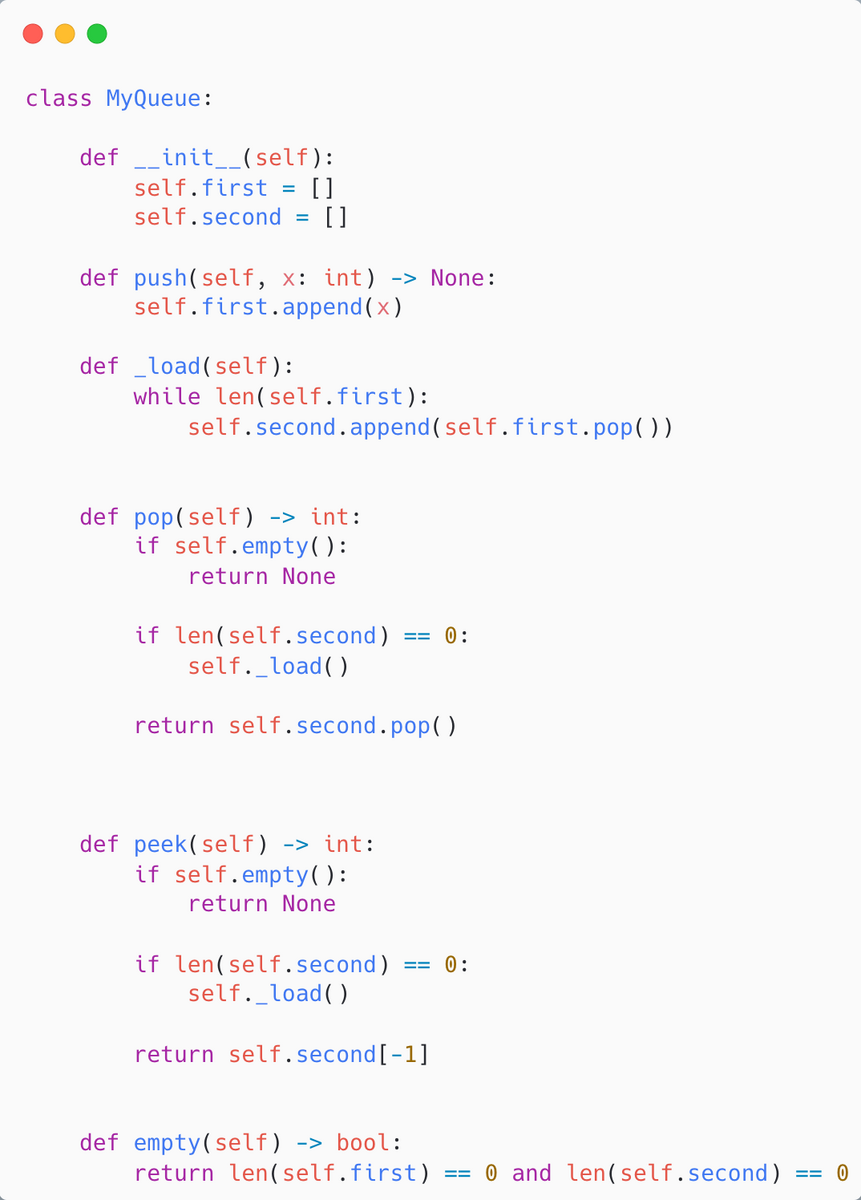