A look into Facebook's key-value store called ZippyDB. Also, a look into the technical implementation of Apple's new CSAM policy. Plus, a great YouTube series on building an Operating System.

Apple will be scanning user images for CSAM material if the user syncs his photos with iCloud.

If CSAM exists in the images (and the number of occurrences passes a certain threshold), Apple will disable the iCloud account and pass the user’s information to federal/state authorities in that jurisdiction.

Privacy experts have almost uniformly criticized this policy, saying it sets a dangerous precedence. Here’s a detailed argument on why Apple’s policy may be dangerous by the Electronic Frontier Foundation.

We’ll be focusing on the technical implementation of how Apple is implementing these CSAM protections.

The hashing is done using NeuralHash, a perceptual hashing function.

Apple then uses another technology called Threshold Secret Sharing, where Apple cannot see how many CSAM matches there are until the iCloud Photos account crosses a certain threshold of known CSAM matches.

At that point, there is a manual review process by Apple. If the flags for CSAM matches are correct, then Apple will send a report to federal or state authorities.

This technology will be included in iOS 15 and iPadOS 15.

Here’s a breakdown of NeuralHash…

NeuralHash is a perceptual hashing function that can map an image to a numerical hash.

NeuralHash is part of the class of Locality-Sensitive Hashing functions.

Images that are slightly cropped or resized will have the same hash as the original.

When you’re using NeuralHash to generate a hash for an image, there are two main steps.

For a much more detailed breakdown, check out Apple’s full technical summary on CSAM detection.

It was first deployed in 2013 and is now used for tons of different use cases like counting events, product data, metadata on distributed applications, and more.

It’s popular for both ephemeral and non-ephemeral small key-value data.

Due to the large number of different use cases, ZippyDB offers lots of flexibility for durability, consistency, availability and latency guarantees.

Before ZippyDB, various teams at Facebook used RocksDB directly to manage their data.

However, this resulted in a duplication of effort as each team was solving similar challenges around consistency, fault tolerance, recovery, replication and capacity management.

ZippyDB was built to solve the challenges for all of these teams.

One key decision was to reuse as much existing infrastructure as possible.

Therefore, ZippyDB uses RocksDB as a storage engine and is built on top of Shard Manager (Facebook’s shard management tool) and on top of ZooKeeper (a distributed configuration service). 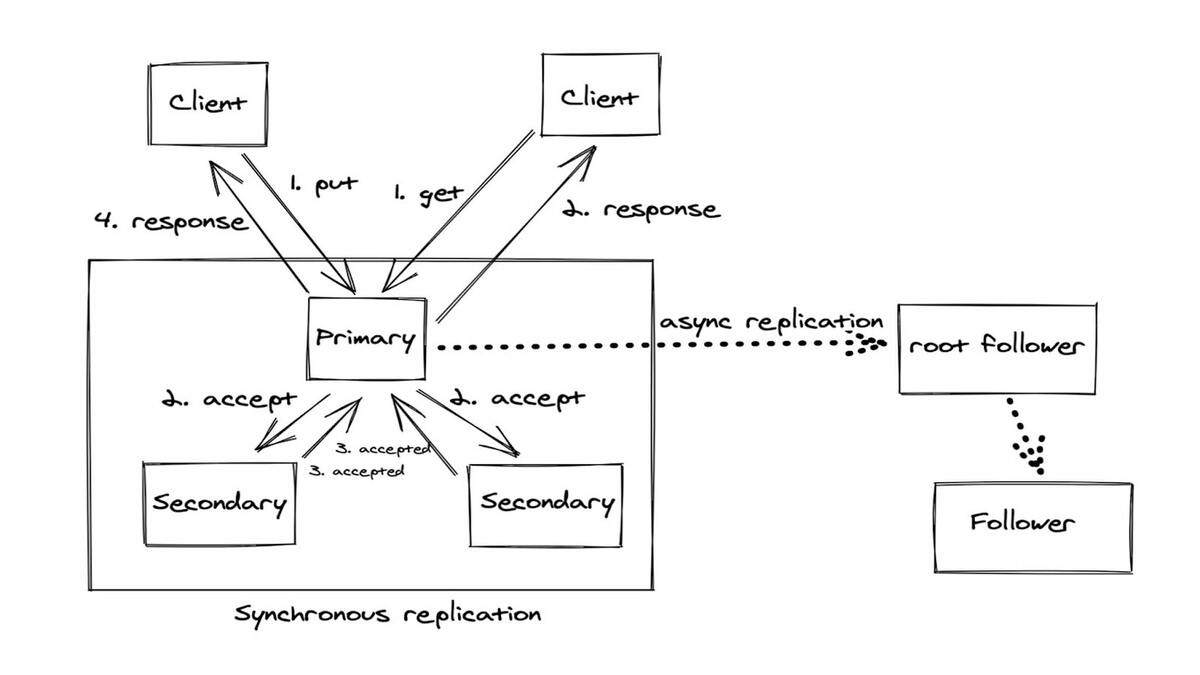 ZippyDB is deployed in units known as Tiers.

Each tier consists of compute and storage resources spread across several geographic areas.

The default tier that is used is the “wildcard” tier, which is the generic multi-tenant tier. This is the preferred tier because of it’s better utilization of hardware and lower operational overhead.

However, additional dedicated tiers can be brought up if needed (usually due to stricter isolation requirements).

The data belonging to a tier is split into units known as shards, which is the most basic unit of data management on the server side.

Each shard is replicated across multiple regions and they either use Paxos or asynchronous replication to replicate data.

The replication strategy can be configured based on application durability needs and write/read performance.

ZippyDB supports a simple key-value data model with APIs to get, put, and delete keys.

You can iterate over key prefixes and delete a range of keys.

The API is very similar to the API exposed by the underlying RocksDB storage engine.

Applications can also access data on ZippyDB through an ORM layer.

Applications can make durability, consistency, and performance trade-offs dynamically on a per request level.

For writes, ZippyDB’s default behavior is to persist the data on a majority of replicas’ Paxos logs and write the data to RocksDB on the primary before acknowledging the write to the client.

Some applications cannot tolerate this much of latency (and don’t need strong durability and consistency guarantees), so ZippyDB supports a fast-acknowledge mode, where writes are acknowledged as soon as they are enqueued on the primary.

For reads, the three most popular consistency levels are eventual, read-your-write, and strong.

ZippyDB supports transactions and conditional writes for use cases that need atomic read-modify-write operations on a set of keys.

Conditional writes are useful for cases where a client wants to atomically modify a set of keys based on some common precondition (such as whether the keys are present, or a certain value matches, etc.)

The conditional write API can be more efficient than the transaction API in cases where clients can compute the precondition without requiring a read.

The digits are stored in reverse order, and each of their nodes contains a single digit.

Add the two numbers together and return the sum as a linked list.

You may assume the two numbers do not contain any leading zeros.

Implement a BST Iterator class that represents an iterator over the in-order traversal of a Binary Search Tree.

We can solve this question by doing an iterative in-order traversal.

When we instantiate our class, we’ll first create cur and point that to None.

Then, we’ll create an empty array that represents our stack.

Therefore, we’ll keep moving down to the left child until we reach None. While we do this, we add each parent node to our stack.

We do this part in _getLeftMost.

When the user calls the next method, we’ll do some basic case analysis.

For hasNext, we can just check if the length of our stack is greater than 0 and if the node at cur has a right child.

If either of those are true, then we can return true. 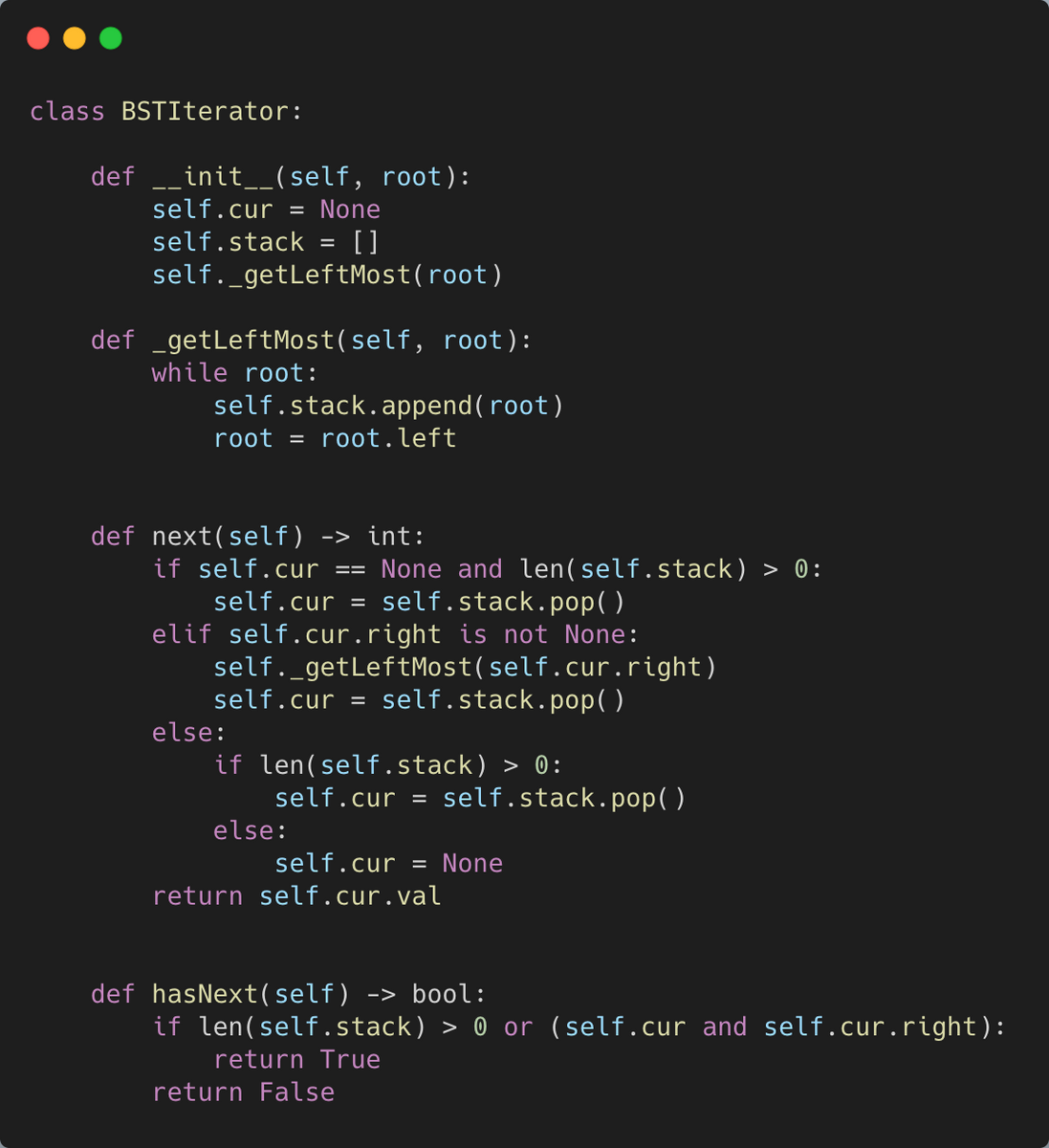